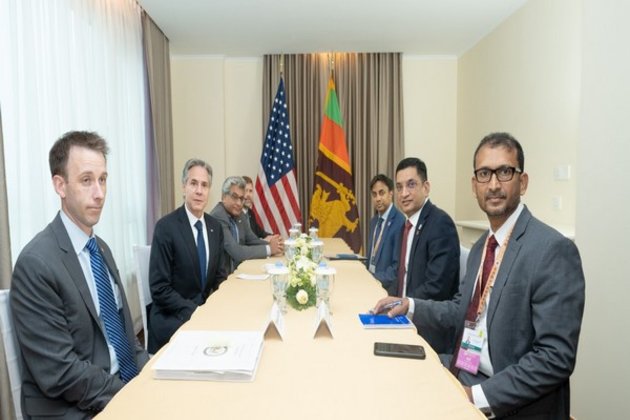 Washington [US], August 4 (ANI): US Secretary of State Antony Blinken met Sri Lankan Foreign Minister Ali Sabry on Thursday in Phnom Penh on the sidelines of the ASEAN Regional Forum and reiterated US support for the most vulnerable people of the crisis-hit island.

"I met with @MFA_SriLanka Minister Ali Sabry at Cambodia's @ASEAN Regional Forum to congratulate him on his appointment. I also reiterated U.S. support for the most vulnerable people of Sri Lanka and highlighted our ongoing efforts to help increase Sri Lanka's economic stability," Blinken tweeted.

Blinken reiterated the United States' support for the people of Sri Lanka, highlighting over USD 179 million in US assistance that will support Sri Lanka's most vulnerable and bolster the country's economy in this challenging time.

A US State Department statement by Blinken also emphasized the importance of working with the IMF to put Sri Lanka back on the path to economic stability.

As Sri Lanka approaches this juncture, the Secretary emphasized the need to act in accordance with the country's constitutional processes and to protect the human rights of all Sri Lankans, including the right to peaceful assembly.

Independent UN experts last month expressed alarm about record high inflation, rising commodity prices, power shortages, crippling fuel crisis and the economic collapse in Sri Lanka, as the country grapples with unprecedented political turmoil. This crisis has had a serious impact on the enjoyment of human rights for the entire population.

"Time and again, we have seen the grave systemic repercussions a debt crisis has had on countries, exposing deep structural gaps of the global financial system, and affecting the implementation of human rights," said Attiya Waris, UN independent expert on foreign debt and human rights.

Sri Lankan President Gotabaya Rajapaksa stepped down on July 15 after fleeing the country as protesters stormed key government buildings in the capital Colombo. New leadership has been elected by the Parliament today.

Mass protests broke out in March following heavy shortages of food, fuel, medicines, and other essential items compounded by a series of ill-conceived economic reforms like tax cuts and servicing debt payments that ate into the country's forex reserves.

Prolonged disrupted access to food and healthcare has severely affected people with illnesses, pregnant women and lactating mothers who are in serious need of life-assistance. (ANI)