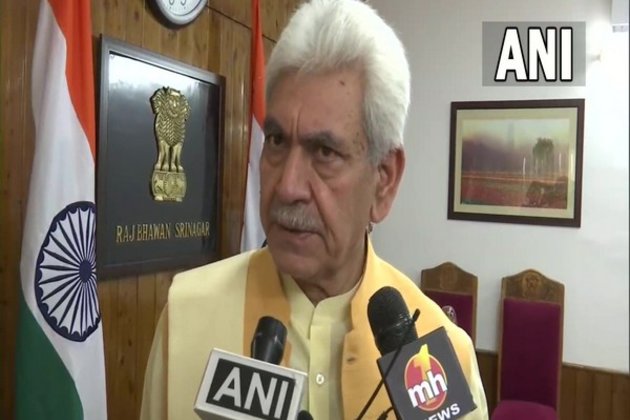 "I salute the bravery of villagers of Tukson Dhok, Reasi, who apprehended two most-wanted terrorists. Such determination by the common man shows the end of terrorism is not far away. UT Govt to extend Rs 5 Lakh cash reward to villagers for the gallant act against terrorists and terrorism,"Earlier in the day, two Lashkar-e-Taiba (LeT) terrorists have been apprehended by villagers of Tuksan in Jammu and Kashmir's Reasi district.

According to the Jammu Additional Director General of Police (ADGP), the apprehended terrorists have been identified as Faizal Ahmed Dar and Talib Hussain.

The Director-General of Police (DGP) announced a reward of Rs 2 lakhs for villagers.

Two AK rifles, seven grenades and a pistol were recovered, the police said.

Earlier on June 30, the Chinar Corps of the Indian Army eliminated two terrorists during Operation 'Kataran' in the Kulgam district of Jammu and Kashmir.

Police said that the joint operation 'Kataran' was launched on Wednesday and the area was cordoned off. One AK rifle, one pistol and war-like stores were recovered.

Earlier on Wednesday, two Lashkar-e-Taiba (LeT) terrorists were neutralized during an encounter that broke out in Kulgam.

The encounter site was very close to the pilgrimage route of the Amarnath yatra. Both the terrorists killed in the encounter were identified and categorized as local terrorists of the proscribed terror outfit LeT.

Jammu ADGP Mukesh Singh said it has been observed LeT is trying to revive terrorist activities in Chenab valley and the Rajouri-Poonch area and managed to revive some workers.

"In the recent past, it's been observed LeT is trying to revive terrorist activities in Chenab valley and Rajouri-Poonch area, managed to revive some workers. In this, 2 modules had been created," Singh said.

ADGP further said Talib was responsible for the Udhampur blast busted a month back and second for blasts at Rajouri district, busted about ten days back.

"First was responsible for Udhampur blast busted a month back and second for blasts at Rajouri district busted about ten days back. But the main terrorist Talib Hussain was absconding. We were after him and local villagers helped us nab these two terrorists," he said. (ANI)

Citing safety of children, LA to move homeless away from schools

LOS ANGELES, California: During a meeting that was disrupted by protesters this week, the Los Angeles City Council voted to ...

WASHINGTON D.C.: The U.S. Justice Department announced this week that former Puerto Rico governor Wanda Vazquez has been arrested in ...

OTTAWA, Ontario: Military trainers from Canada will head to the United Kingdom to teach Ukrainians new techniques for fighting the ...