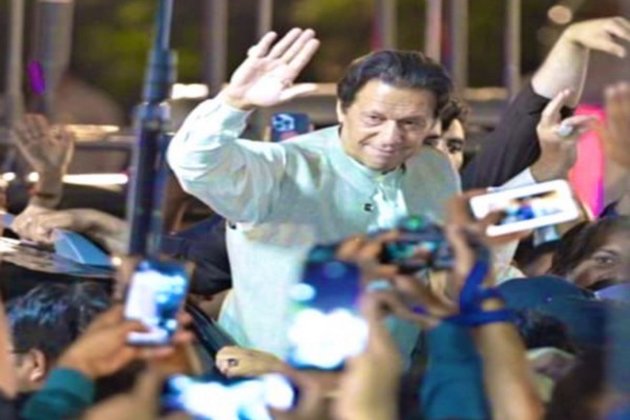 Lahore [Pakistan], July 3 (ANI): Former Pakistan Prime Minister and Pakistan Tehreek-e-Insaf (PTI's) Chairman Imran Khan defended his former wife Bushra Bibi, who is accused of running the affairs of the PTI from the back.

Imran Khan and other PTI leaders in the past had said, "Bushra Bibi is a housewife and a spiritual guide."Imran Khan, while talking to his social media teams, had said that he had never seen anyone stooping this low the way they had attacked Bushra Bibi. She was not a public figure or a politician and she had never come before anyone, reported The News International.

Imran Khan had also said that Bushra Bibi had no bank account, so they were targeting her friend because they didn't find anything about her.

Shibli Faraz and Farukh Habib had also defended Bushra Bibi in the media as purely a housewife and claimed that she had nothing to do with politics.

Shehbaz Gill had also defended her on various occasions, saying these people had attacked the first lady during the last three and a half years.

He said that she was not into politics nor had she ever given any statement or reaction to any political news.

The defence of Bushra Bibi comes amid a leaked video which reveals her giving instruction to PTI's social media head, Dr Arsalan Khalid, to run trends declaring people who oppose PTI as traitors.

"Imran Khan asked you to (run) the traitor hashtag, so many people called, your social media was active and it has not been active for a week. Why is it (like this), beta?" asked Bushra.

As per the audio, initially, the former first lady had expressed her disappointment with Dr Khalid for the PTI's social media team not being active these days.

"The other thing that I wanted to say to you, Arsalan, is that they will say a lot of things about Farah and me. You have to link that with traitor (hashtag)," said Bushra.

To this, Dr Khalid said, "Yes, all right we will do it by (saying) that they are doing all this because they are traitors."The former first lady said then told Dr Khalid that people were worried about how Imran Khan had knowledge about everything even before they come out in the open, reported Geo News.

"You understand, but I am only telling you these things, however, you do not need to share this issue with anyone. They are after him because of this. (But)what you have to do is that you have to link with this with the traitor (hashtag)," said Bushra.

Ever since Imran Khan came to power rumours were rife about the former first lady's involvement in politics. Reports had claimed that Bushra had played a crucial role in Usman Buzdar's appointment as Punjab chief minister to the removal of cabinet members, reported Geo News. (ANI)