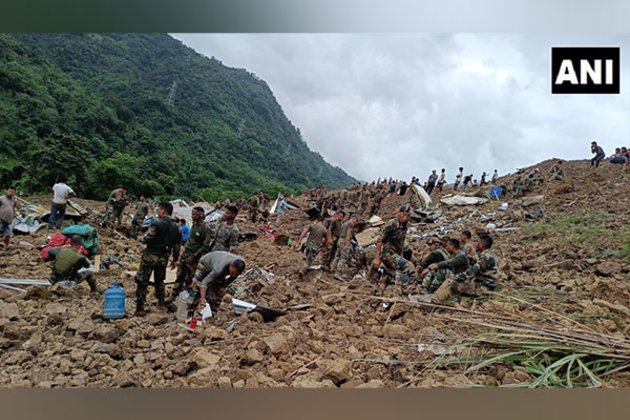 Imphal (Manipur) [India], June 30 (ANI): Troops of Indian Army Assam Rifles and Territorial Army continued the rescue operations to save the landslide-hit throughout the day in the general area of Tupul railway station, Noney district, Manipur in spite of inclement weather. Teams of Indian railways, civil administration, NDRF, SDRF and locals of Noney District are also actively contributing in the search, an official statement read.

So far, 13 soldiers of the Territorial Army and five civilians have been rescued, while the mortal remains of seven soldiers and one civilian have been recovered.

Relentless search operations will continue during the night. Engineering equipment including dozers has been pressed into service for creating access to the incident site and to help in the rescue efforts.

The civil administration has cautioned civilians living in downstream areas of the river to take precautions and evacuate due to the likelihood of breach in the dam created on the river by the landslide.

The incident took place on the intervening night of Wednesday and Thursday near the company location of 107 Territorial Army of Indian Army deployed near Tupul Railway Station in Noney district for protection of the under-construction railway line from Jiribam to Imphal. (ANI)