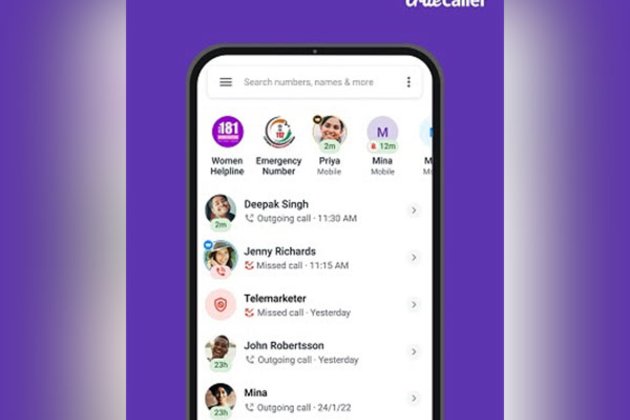 New Delhi [India], May 11 (ANI/NewsVoir): The Delhi Commission for Women's Helpline - '181' received 200 per cent more calls by integrating the 181 Women's Helpline Quick Dial Feature within the Truecaller App. Since March this year, Truecaller started displaying the women's safety helpline number -181 - on its dialler, as part of its campaign on crimes against women and girls - ItsNotOk.

With the Women's Helpline 181 being prominently visible within the Truecaller dialler, the Delhi Commission of Women witnessed a huge spike in the calls that were landing on the Helpline in Delhi. Prior to Truecaller's integration, the Commission's helpline 181 received around 2000 calls per day, which has now grown to more than 4,000 calls per day resulting in almost a 200 per cent increase in total calls received per day. A significant portion of the 65.5k calls received in March were to enquire about the role of the 181 Women Helpline and understand its role in the safety of women and girls.

The women and girls of Delhi continue to seek help from the 181 women helpline in cases related to domestic violence, sexual assault and other crimes against women. The Commission works on each case and helps hundreds of women and girls through this process. For instance, in April 2022, 181 women helpline received a call from a woman's brother who informed that his 31 year old sister had been held captive at her matrimonial home in Chhattisgarh and was being beaten up by her husband on a regular basis. Immediately, the 181 Women Helpline team spoke with senior police officers in Chhattisgarh and kept taking follow up till the girl was rescued by them. The girl has now returned to her paternal home in Delhi.

Pragya Misra, Director of Public Affairs, Truecaller, said, "Today, over 10 crore women in India use Truecaller as their first line of defence against calls and SMS based harassment. Pinning the emergency helpline number on the Truecaller dialler for a one-click access to 181 women's helpline number in times of emergency is another step to keep our users safe. About 2.45 million of our 220 million users in India called the 181 helpline to make 4.21 million calls over 45 days from within Truecaller. This is our attempt to empower women by creating awareness on the actions that they can take to combat and call out harassment."Swati Maliwal, Chairperson of the Delhi Commission for Women, endorsed this effort by saying, "I laud this brilliant proactive initiative by the Truecaller. The Delhi Commission for Women has helped lacs of women and girls through its 181 Women's helpline in the past 6 years. The present initiative of Truecaller has doubled the calls received on the Commission's helpline, thereby significantly increasing the reach of the Commission. The Commission has set up robust systems to handle the increase in calls and is further strengthening the same with the help of the Delhi Government. It's our sincere effort to reach out to each and every woman and girl in distress."Truecaller enables safe and relevant conversations between people to make it efficient for businesses to connect with consumers. Fraud and unwanted communication are endemic to digital economies, especially in emerging markets. Truecaller is on a mission to build trust in communication. Truecaller is an essential part of everyday communication for over 300 million active users, with half a billion downloads since launch and close to 38 billion unwanted calls identified and blocked in 2021. Headquartered in Stockholm, since 2009, it is a co-founder-led, entrepreneurial company, with a highly experienced management team. Truecaller has been listed on Nasdaq Stockholm since October 8, 2021.

For more information, please visitThis story is provided by NewsVoir. ANI will not be responsible in any way for the content of this article. (ANI/NewsVoir)