J-K: Residents celebrate as Samba village gets road connectivity for the first time since independence 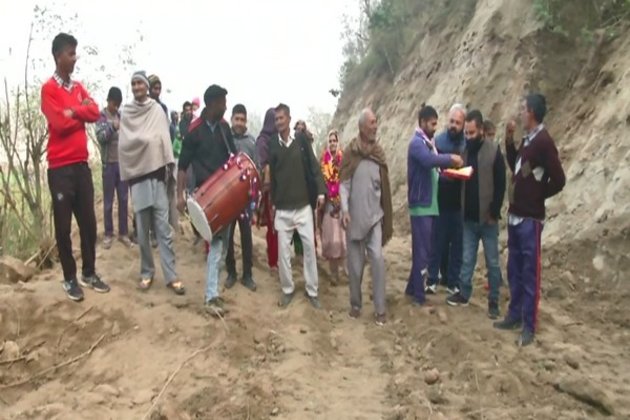 Samba (Jammu and Kashmir) [India], January 15 (ANI): The people of Darui Panchayat in the Samba district of Jammu and Kashmir on Friday started celebrating and dancing with joy after the road construction work was taken up in the village for the first time since independence.

As soon as the JCB machine was installed, the people of the village started dancing to the beats of the drum and exchanging sweets among themselves.

The work of Samba's Pahari Panchayat Darui to village Bardhan started on Friday from JCB which is 2 km 500 meters and in which Rs 2 crore 29 lakh will be spent.

The work of Panchayat Darui to village Bardhan, which is 2 km and 500 meters started on Friday. The amount of Rs 2,29,00,000 will be spent to construct this road.

The local people welcomed Vimala Devi, the sarpanch of the panchayat and thanked her as she had played a very important role in getting the road built.

Speaking to ANI, Vimala Devi said people were engaged in trying to get this road constructed since 2009 but finally the work has started in 2022.

"People were engaged trying to get this road constructed since 2009 after so many attempts finally the work has started in 2022. This road is being built under the NABARD scheme, only for three villages. Approval has been received and after completion of this work, our next goal is to connect this road to many villages from Nangal, Khirdi and others till Purmandal," said Vimla Devi.

A villager said that this road was among the long pending demands of the village as everyone from school going students to pregnant women was facing issues.

"The connectivity was very important between Bardhan and Lalali road. Earlier people were facing lots of problems. It was very difficult to travel. There was no road for us. Students, pregnant women, and others were facing problems. Now when the road will be constructed, it will a big convenience for us. I am very thankful to Central Government for this," he said.

"We thank our sarpanch and central government for fulfilling our demand. Before this we have seen the days of great difficulties, there are rivers on both sides of our village, during the rainy days I used to lift my children on my shoulders and go to school after crossing the cotton river and used to bring them with me after they leave from school. During the rainy days the water was very high," said Raj.

He further said that people of many villages like Bardhan, Lalali, Nangal and Khirdi still have no access to roads and have to cross the river to go anywhere outside the village.

"During the rainy days, pregnant women also faced a lot of problems. Many women used to move to the house of a relative during the time," he addedA local resident, Diggy Sharma said, "We are very happy that the road will be constructed. The next generation will not have to face the troubles we have faced. ""There was no road connectivity in three-four villages in Samba district. We had faced lots of difficulties. We were trying to get the road constructed for years. Because of Central Government now we will also move ahead. Our children can easily go to schools and colleges. Earlier, we used to take the sick people on the cot. There are many more villages where there is no road connectivity. So, I urge Central Government to construct roads for them too. I am very thankful to the Central Government for this," said Sandeep Singh. (ANI)