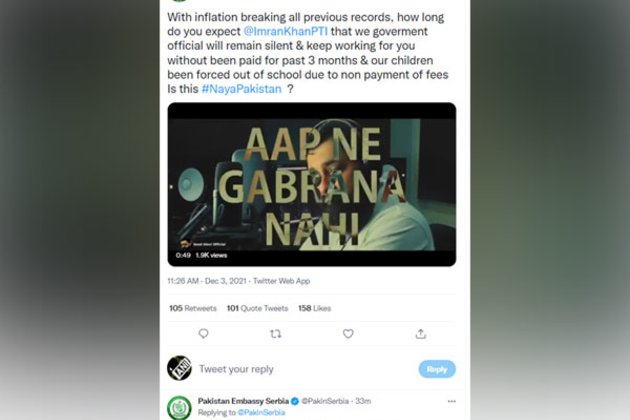 The Twitter handle shared a video in which it raised questions over Khan's so-called "Naya Pakistan" pitch and asked how long does the government expect its officials to remain silent when they have not been paid for the last three months.

Video shared by the Pakistan embassy shows that how the people of the country are making do under "severe" poverty.

It also depicted the miserable condition of the government employees under Imran Khan's regime, stating that they have been working unpaid for the last three months and their children are being forced out of schools due to non-payment of their fees.

"With inflation breaking all previous records, how long do you expect @ImranKhanPTI that we goverment official will remain silentkeep working for you without been paid for past 3 monthsour children been forced out of school due to non-payment of fees Is this NayaPakistan?," the embassy in Serbia tweeted.

In another Tweet, Pakistan Embassy in Serbia said: "I am sorry @ImranKhanPTI, am not left with another option."Reports said that the inflation in Pakistan has risen to 11.5 per cent from 9.2 per cent earlier this week, the highest spike in the last 20 months. In November the inflation rate in the country was over 9 per cent with per capita income decreasing to USD 1,260 in 2021.

Therefore the per capita income that stood at USD 1,482 in 2018 tumbled to USD 1,194 in 2020 which has been estimated by IMF at USD 1,260 in 2021 still showing the fact that the purchasing power parity has eroded a lot, reported The News International.

The bad governance and wrong decisions at the highest level of first exporting sugar then importing it and the same with wheat and flour coupled with discouraging cultivation of pulses and cotton also played a vital role in increasing the food inflation and importing over USD 1 billion cotton further resulted in the devaluation of the rupee. (ANI)