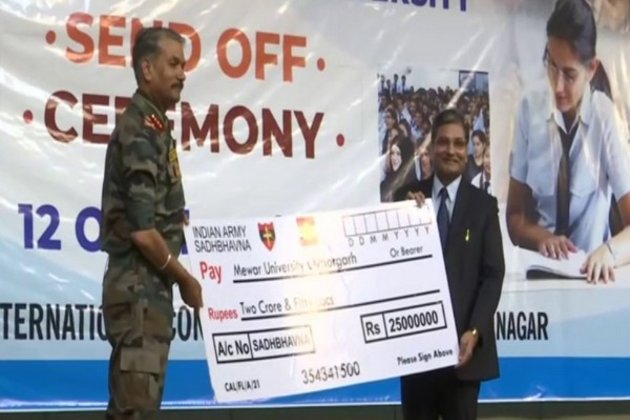 Srinagar (Jammu and Kashmir) [India], October 14 (ANI): A batch of 300 students selected under a special scholarship scheme by the Indian Army in association with Mewar University was given a warm farewell by the army on Thursday.

Under this scholarship scheme, many talented but under-privileged students of the Union Territory will now get access to high-quality education in a variety of courses provided by Mewar University in Chittorgarh city of Rajasthan. The expenditure for the education will be borne by the army and the university and students will have to pay only nominal charges to the university.

A send-off ceremony was held in Sher-i-Kashmir International Convention Centre. A cultural and entertainment program was organised as a part of the ceremony. Lt. Gen DP Pandey, on behalf of HQ Northern Command, handed over a cheque of Rs 2.5 crores to the university.

Students lauded this collaborative initiative of the army and Mewar University, emphasising the importance of such scholarships for the underprivileged students, who often resort to criminal activities and drug usage.

Speaking to ANI, a student named Rauf said, "We will get to pursue medical courses, B.Tech courses etc. We will have to pay only Rs 30,000 for our four-year courses, out of which Rs 10,000 will be refunded. It will benefit the underprivileged, poor youth and those who could indulge in drug usage and crimes as they will now have their degrees to focus on."Another student named Sakib said that such scholarships should reach more upper and distant places of the Union Territory, where children have no infrastructure and proper access to education.

"I am a son of a farmer. I can not go to my father and demand Rs 2 lakhs from him for a college degree. But through this scholarship, now I will be able to get my degree by only paying Rs 30,000 from my own pocket and that too from a good university," he added.

Nafees, a student selected for BSc (Forestry) added, "It will help the people from the underprivileged backgrounds. I am extremely thankful for the army and the university for this initiative. The course I am selected for would have cost me Rs 8 Lakh had I done it from some other university. But here, I will pay only 25 per cent while the rest will be paid by the Army and the university. More scholarships like this are needed. Jammu and Kashmir has a lot of talent, but a lot of it is from underprivileged backgrounds." (ANI)