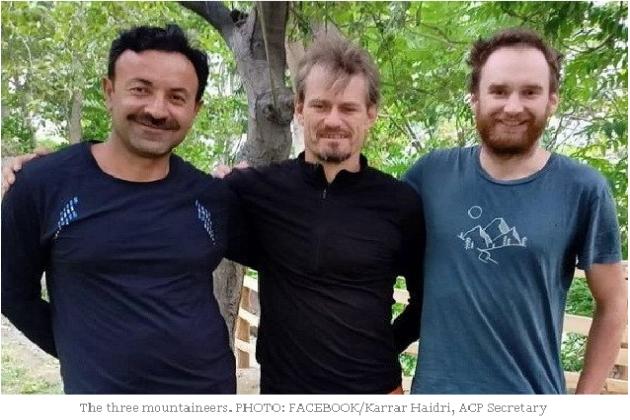 GILGIT, Pakistan - Chief Minister Gilgit Baltistan Khalid Khurshid has thanked Army Aviation, for their assistance in the recent rescue of trapped mountaineers on the Rakaposhi peak.

The Alpine Club Pakistan (ACP) stated that two Czech climbers, Peter Macek and Jakub Vicek, and a Pakistani climber, Wajidullah Nagri, were trapped on the 7,788-metre-high mountain on their way down after summiting the peak.

For four days, the trio was stranded at an altitude of around 6,900 meters, with food and other essential supplies being flown in via helicopter for them, stated Nagar's deputy commissioner (DC).

A team of expert climbers was formed by the Gilgit Baltistan administration to take part in the rescue operation, including Sajid Ali Sadpara, the son of legendary mountaineer Mohammad Ali Sadpara.

The first few attempts to conduct a helicopter rescue were called off due to rough weather conditions in the area. The mountaineers, however, were in touch with their families via satellite communication.

The secretary of the ACP also confirmed with a post on Facebook that Army Aviation successfully rescued the three-stranded climbers.

"With the continuous efforts of Army Aviation, the rescue mission was accomplished," CM Khurshid said, commending the role of Army pilots.

He added that Nagri and the foreign climbers' cooperation with Force Command Northern Areas helped in the rescue.

The chief minister further stated that Gilgit Baltistan is a unique destination for mountaineering, and the province has been depicted positively all over the world because of its mountaineering opportunities.