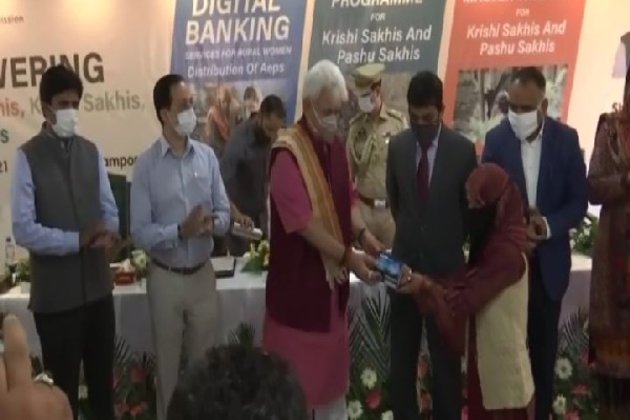 Srinagar (Jammu and Kashmir) [India], September 15 (ANI): In order to promote sustainable agriculture and door-to-door banking services in the rural areas of Jammu and Kashmir, the Lieutenant Governor of the Union Territory, Manoj Sinha on Tuesday inaugurated three training programs, that is -- Digipay Sakhis, Krishi Sakhis and Pashu Sakhis.

Speaking to ANI, Manoj Sinha said, "The Digipay facility will be provided in 2,000 remote villages of the UT. In its first phase, a total of 80 women from Self Help Groups across the Jammu and Kashmir Division have been selected as Digipay Sakhis."Under the Digipay training program, the Lt Governor had distributed 80 Aadhaar Enabled Payment Systems devices (AEPS) to women who will work as mini-banks for the people of rural areas. The program will provide door-to-door banking services to the people living in rural areas.

A woman participant of these training programs said, "All the women who will work under this training program will get Rs 2,000 every month for the first year of its launch. Later on, they will get commission on every transaction.""Women can also be entrepreneurs in the future and train other members of their family about these programs and digital banking services," she added further.

While another woman said that they have been taught about increasing milk production and vaccination of livestock under the Pashu Sakhi program.

Meanwhile, the trainers will teach how to avoid the use of chemicals in farming under the Krishi Sakhi program and increase production which will also help in maintaining the ecological balance in the environment.

The training programs are to be held in Jammu and Kashmir divisions for one week. (ANI)