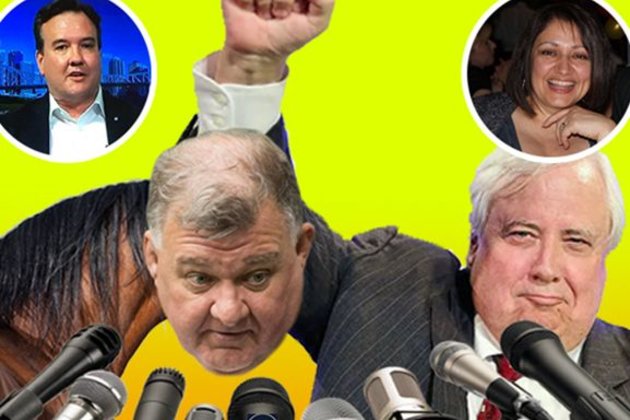 In an exclusive interview on The Sun Rises, heavyweights from the United Australia Party discuss the benefits of ivermectin and their party's overinflated membership count.

Ann Ardasuckup: Good morning and welcome to The Sun Rises. I'm Ann Ardasuckup and we are joined today via video link by a man we've all been hearing so much from, especially via unsolicited text messages, the new leader of the United Australia Party, Craig Killey.

Good morning Mr Killey! And how are you this crisp early spring morning?

Craig Killey: Well, thanks very much Ann, I'm feeling pretty good, thanks. I just got back from getting my second dose of ivermectin.

Craig Killey: That's correct, Ann! I'm fit to run the Cox Plate and, indeed, completely free of heartworm, the vet said. He also trimmed my forelocks and did my hooves, so I'm looking great, too.

Ann Ardasuckup: Well, if only you were here, I could pat you. (GIGGLES) I presume this treatment means you remain free of COVID?

Craig Killey: Well, Dr Giddyup wasn't quite so emphatic about that, but he did say my chronic scabies and headlice infestations were finally showing some slight signs of improvement. So, it's been a good day, so far! Touch wood.

Ann Ardasuckup: Please, Mr Killey, if you would refrain from touching your, ah, "wood" while we're on air - this is going out live.

Ann Ardasuckup: Trotting right along. Mr Killey, you have received a lot of criticism after sending numerous text messages to virtually every Australian. What is your response?

Craig Killey: It's totally wide off the mark Ann. Unreasonable and a bit silly. I mean, if you were on Clive's new Vodafone mobile plan, Spam Australia, with your first 150 million SMS messages free, what do you think you'd do? I mean, come off it!

Ann Ardasuckup: That seems perfectly reasonable, Mr Killey. However, some of the text messages themselves have attracted criticism for so-called questionable content.

Craig Killey: Questionable content? That'd be right. Well, here at the United Australia Party, we won't be dictated to by the woke politically correct decaf soy latte sippers down at the Balmain basket-weaving commune and co-op. What have they said now?

Ann Ardasuckup: Well, let's see. The Therapeutic Goods Administration appear to be slightly miffed your party sent out a link to a document criticising the efficacy of COVID vaccines and their side effects, allegedly from the TGA, but which was linked, in fact, to a document you created and was on the UAP website.

Craig Killey: So what? Clive and I spent hours - okay, at least an hour - researching on YouTube and Tik Tok to come up with that document and it's 100 per cent accurate. Unlike the dangerous misinformation you get from the TGA, which we all know is owned lock stock and barrel by Big Pharma!

Ann Ardasuckup: So, you're not worried about the TGA making a criminal complaint against you personally?

Craig Killey: Ha! They'll never take me alive! Especially not if I have too many more doses of that horse drench. I'm not feeling too good. (RETCHING SOUNDS) I'll be back in a sec.

Ann Ardasuckup: Well, it looks like we're going to have to end our extremely informative chat with UAP leader Craig Killey, who appears to be momentarily indisposed.

Ann Ardasuckup: Oh, Mr Palmitoff, welcome to The Sun Rises! Well, firstly, is your party leader okay? It sounded like he was quite ill.

Clive Palmitoff: Oh, don't worry about him, Anniekins, there's nothing like a bit of regurgitation. You should see me heave after my usual 32-course brunch at Moo Moos. Better out than in! That's what I always say!

Clive Palmitoff: I'm just a humble Queensland miner, Ann. Nothing fancy. Though I wouldn't mind doing a bit of prospecting for hidden treasure on you, if you know what I mean. Eh? Eh?!

Ann Ardasuckup: Oh, dare I say, you can fossick around my seams anytime...

Clive Palmitoff: Now you're talking! This is making me get close to ducking off to get some assistance from Mrs Palmer and her five daughters!

Ann Ardasuckup: (CLEARS THROAT) Now, Mr Palmitoff, I believe your party has had a huge increase in membership ever since you appointed Mr Killey as leader?

Ann Ardasuckup: That does sound like a lot... Are you sure you have that many? Some woke lefty online publication, Independent Australia I believe, says you're signing people up without their knowledge?

Clive Palmitoff: Independent Australia! Independent, my arse! Well, if we waited for people to sign up, we'd never be able to divert democracy, would we? Bloody hell, people are picky!

Ann Ardasuckup: I see, so how many people have voluntarily signed up?

Clive Palmitoff: Let me see, oh yeah... 3,000... Oh, wait up, somebody just handed me a piece of paper... well, technically three...two, the other person hasn't actually signed yet.

Ann Ardasuckup: I see. Some have also suggested it's a bit rich that Mr Killey agreed to lead your party since he once said you were a menace to democracy.

Clive Palmitoff: What, is that a bad thing?