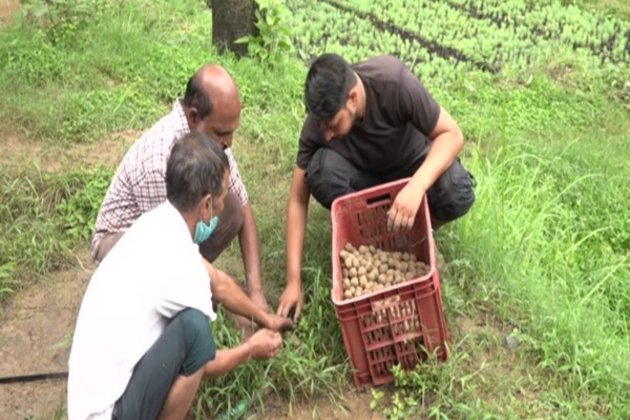 Udhampur (Jammu and Kashmir) [India], August 2 (ANI): How do you plant saplings in inaccessible hilly areas for increasing the green cover? The forest department has a solution called seed balls that it is using in Jammu and Kashmir's Udhampur district: It wraps seeds in soil balls and throws them in areas which are hard to reach.

Earlier on Friday, Jammu and Kashmir Lieutenant Governor, Manoj Sinha launched 'Green Jammu and Kashmir Drive-2021' from the Indian Institute of Technology (IIT) Jammu with a target to plant 1.30 crore saplings this year.

In view of this mission, Udhampur forest division geared up and adopted this rare concept.

As the hilly areas in Udhampur pose a problem to reach and dig a patch to plant saplings, these seed balls prove as an innovative solution to sideline these problems.

Seed balls or seed bombs are seeds that have been wrapped in soil matter and then dried. The soil matter is often a mixture of clay and compost. The seed is, therefore, pre-planted and can be sown by depositing the seed ball anywhere as long as the plant species can survive in that terrain. The wrapping mixture keeps the seed safe until it can properly germinate. Seeds Balls also help recuperate the forests facing massive deforestation and also help barren lands and other areas where the Plantation is not possible to revive the green cover.

Emphasizing on achieving the target of planting 1.30 crore saplings, she said, "Two innovative schemes were launched to achieve the said aim. One of which is the seed balls initiative. This year, 35 villages will be provided seed balls free of cost. We are aiming to cover degraded patches."The DFO further said, "Our Himalayan states have a fragile ecosystem. With such initiatives, we will secure our future."Mahesh Abrol, Range Officer of Udhampur Forest Division also echoed a similar positivity of achieving the target and said that seed balls will help in planting trees in area that are difficult to reach.

Meanwhile, nurseries in Udhampur are also growing saplings for the rest of the areas where plantation drives can take place.

"About 1.5 lakh saplings have been grown in the Mand nursery and over 50,000 of these saplings have been given to different agencies including paramilitary forces and educational institutions. The aim is to increase green cover where the area is degraded. We have also preparing seed balls for areas where it is difficult to reach," said Rajneesh Sharma, a forester in Udhampur Division.

Seed ball concept is not only innovative but also a low-cost invention, according to Kuldeep Gandotra, incharge of forest nursery in Mand, Udhampur.

"Seed balls of various varieties have been made. We throw these seed balls they grow on their own by absorbing moisture. There is no need a dig a patch like it is done for planting a sapling," he said.

Gandotra stressed that increasing green cover with help of seed balls in inaccessible areas will also reduce natural calamities like landslides as plants hold the soil together. (ANI)