Muslims in UP descendants of Lord Vishwakarma: BJP MP 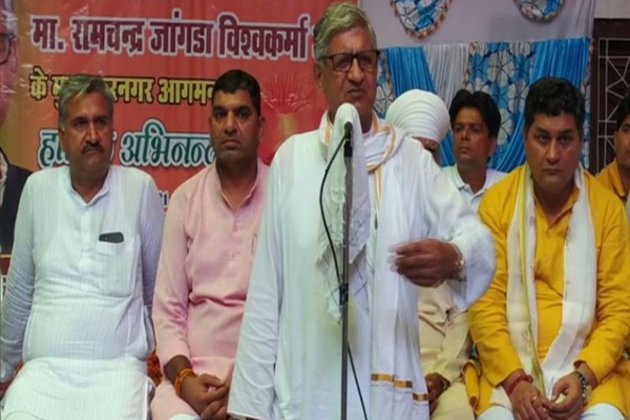 Muzaffarnagar (Uttar Pradesh) [India], August 1 (ANI): As Assembly elections in Uttar Pradesh draw near, political rhetoric to persuade voters based on electoral identity has started in the state.

Bharatiya Janata Party's (BJP) Rajya Sabha MP Ram Chandra Jangra while addressing the 'Vishwakarma' community recently said that Muslim artisans from the region were originally Hindus who had converted as they were not given proper recognition in Hinduism.

Addressing a public meeting, the BJP MP further said that former Minister of Law BR Ambedkar had converted to Buddhism because he wasn't given due respect in Hindusim.

"Not just Hindu artisans, but artisans of Muslim community also belong to 'Vishwakarma' community. Babur didn't bring craftsmen with him. There cannot be any craftsman on the soil of Iran and Iraq and in all the Gulf countries, where even grass do not survive. That land is filled with sand dunes and there are no stone mountains there. No mineral comes out from that land, only oil. Therefore all Muslim brothers here are descendants of Lord Vishwakarma," said the BJP leader.

He claimed that he was a student of History and is aware of why Muslim craftsmen had converted to Islam.

Quoting the epic Mahabharata, the BJP leader said, "Bhishma Pitamah said whenever there is injustice, discrimination and atrocities, leave everything and come to the field of Kurukshetra."He added that "this was not only done by Islamic craftsmen but also to Baba Saheb Ambedkar. He had to say that I was born a Hindu but I will not die as a Hindu. Because even after being educated, he did not get respect in society. And that is what must have happened to Muslim craftsmen leading to their conversion," he added.

The BJP MP further asked all the artisans to unite and vote for BJP in the upcoming Assembly elections in UP. (ANI)