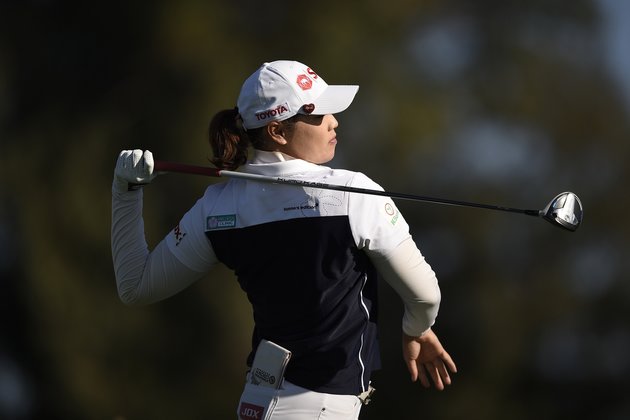 Ariya Jutanugarn fired a 9-under 63, then waited out a thunderstorm to claim the title by one stroke Sunday at the Honda LPGA Thailand.

On Sunday, Jutanugarn started the day five strokes off the lead, but picked up six birdies on the front nine and three more on the back to go into the clubhouse at 22-under.

Jutanugarn credited her mental coaches Pia Nilsson and Lynn Marriott with motivating her to her 11th career title and first since July 2018.

"Today is Pia's birthday, and I talked to them and I'm like, 'You know, I hit my iron like everywhere. I miss the putt. I mean, I feel like so tough for me. What should I do?' " Jutanugarn recalled. "They're just like, 'How about you just go out, have good commitment, and not thinking about the outcome. So can you do that for my birthday present?' Okay, I will try harder."

Fellow Thai Atthaya Thitikul, 18, remained on the course, and after a one-hour weather delay, still had a chance to catch or beat Jutanugarn on the 18th hole.

Trailing by one, Thitikul was only able to manage a par on No. 18 after a bogey on No. 17 and finished one stroke back alone in second place.

Jutanugarn wanted to watch the action on the final green, but said her caddie kept her focused.

"On the putting green I wanted to watch how they play so bad. I want to know because I feel like I have to go playoff anyway, but my caddie stop me," she saidn.

"He's like, 'You watch or you not watching them play the result not going to change. How about you just putt and practice?' And I'm like, 'OK, I do it.' So I putt, keep putt, and he walk to me and give me a hug, so like, oh, I win the tournament."

Patty Tavatanakit, another Thai player who led by one coming into Sunday's final round, shot her second consecutive 2-under 70 to finish in a four-way tie for third.

Tavatanakit was seeking her second victory of the season, having won the ANA Inspiration last month in Rancho Mirage, Calif.

Angel Yin of the United States and South Korea's So Yeon Ryu and Amy Yang, the defending champ, were the other third-place finishers.

Germany's Caroline Masson trailed by one heading into the final round, but finished with a 1-under 71 for a tie for ninth place.