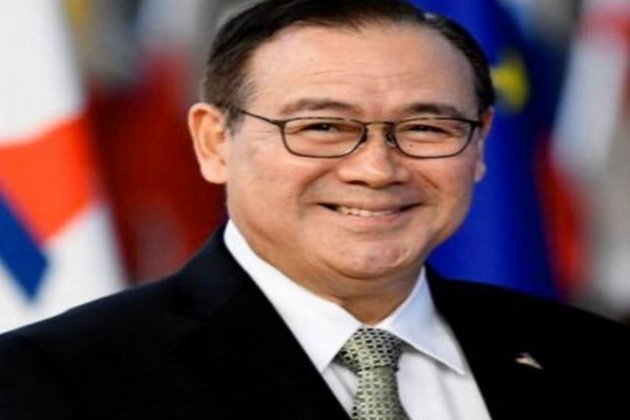 Manila [Philippine], May 4 (ANI): In a further escalation of the war of words with Beijing, Philippine foreign minister Teodoro Locsin had issued an expletive-laced warning to China, asking it to get out of disputed waters, where over 200 Chinese vessels have remained moored since last month.

The Philippine Coast Guard has revealed that despite repeated demands by Manila that Chinese ships leave Whitsun Reef, at least 240 Chinese vessels remained in the area and surrounding waters as recently as Wednesday.

"China, my friend, how politely can I put it? Let me see... O...GET THE FK OUT," Locsin tweeted on his personal account.

"What are you doing to our friendship? You. Not us. We're trying. You. You're like an ugly oaf forcing your attentions on a handsome guy who wants to be a friend; not to father a Chinese province ..." Locsin said.

The defence and foreign affairs ministries in the Philippines have been up in arms for a fortnight over the presence of 240 fishing boats suspected to be manned by Chinese maritime militia at Whitsun Reef, with statements flying back and forth over the alleged incursion into the Philippines' exclusive economic zone.

As of April 26, the Philippines had filed 78 diplomatic protests to China since President Rodrigo Duterte took office in 2016, Philippines Foreign Ministry data shows.

"Our statements are stronger too because of the more brazen nature of the activities, the number, frequency and proximity of intrusions," said Marie Yvette Banzon-Abalos, executive director for strategic communications at the Foreign Ministry.

China claims sovereignty over almost the entire South China Sea and has overlapping territorial claims with Brunei, Malaysia, the Philippines, Vietnam and Taiwan.

China has been increasing its maritime activities in both the South China Sea and the East China Sea over the past few months, partly in response to Beijing's concerns over the increasing US military presence in the region because of escalating Sino-US tensions.

Beijing's rising assertiveness against counter claimants in the East and South Sea has resulted in unprecedented agreement across the Indo-Pacific. (ANI)