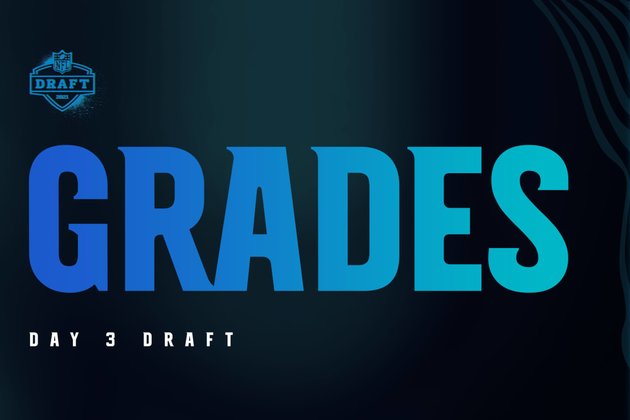 Analysis: The Panthers used all seven of their 2020 draft picks on defense and they could not resist starting the 2021 draft with a defensive player, selecting a talented, athletic, press corner in Horn. They focused, rightly, on offense on Day 2, getting excellent value in Marshall (only injuries kept him from the first round), Christensen (solid, reliable tackle who will compete with Greg Little at left tackle) and Tremble (watch for him to contribute as a nice target for new quarterback Sam Darnold).

The Panthers found a replacement for Mike Davis in Hubbard, who saw his stock drop a bit in 2020 but has enough speed and toughness to excel. Nixon was an excellent find in the fifth round, potentially becoming a Grady Jarrett-type value because of his quickness and tenacity. Taylor joins Horn as another physical outside corner. Brown isn't a great mover but will be a nice power scheme blocker. He's tough to shake once engaged. Receiver depth was still a consideration late in the draft, and Smith's toughness from the slot and as a returner belies his slight frame.

Last year, I felt that Carolina should have taken Javon Kinlaw instead of Derrick Brown in R1, but I agreed with most of the other decisions. This year, same thing, with Jaycee Horn playing Brown and Patrick Surtain playing Kinlaw. This is nitpicky, though, as Carolina took my No. 13 overall player in the class at 1.8, not terrible value if you have a conviction. The rest of the class is what won me over. Reuniting Terrace Marshall Jr. with his college passing-game coordinator Joe Brady was a stroke of genius when the NFL shied from Marshall due to reports of a leg issue. The Panthers scored enormous value with the Christensen, Tremble and Nixon picks, and I think they found a couple long-term roster cogs in R6 with Brown and Smith.

Committing to Sam Darnold for the immediate future instead of picking Ohio State quarterback Justin Fields at no. 8 could end up looking like a mistake for the Panthers in retrospect. That's the only thing keeping me from giving this haul an A. Nevertheless, I think Carolina came out of this weekend with a handful of great players. Horn is a day-one starter with a feisty attitude and lockdown skills. Marshall is a first-round talent with the upside to develop into a star, and could thrive after being reunited with former LSU offensive coordinator Joe Brady. Christiansen and Tremble should help Darnold out from the jump. And I approve of the Panthers picking Nixon (the 39th-ranked player on my board) in the fifth round and Brown (the 73rd-ranked player on my board) in the sixth. All in all, this has the makings of a strong first draft for general manager Scott Fitterer.

Rookie GM Scott Fitterer was quite active before and during the draft and has already recouped some of what he spent on Darnold. Since then, Fitterer has busily gone to work in a bid to help his new quarterback - something the Jets didn't do nearly enough - WR Terrace Marshall Jr., LT Brady Christensen, TE Tommy Tremble and RB Chuba Hubbard all coming after Round 1. And that first round did net CB Jaycee Horn, the first defender picked in 2021. Fitterer will need to hope Marshall is healthy enough to contribute and that he didn't miscalculate when Fields was available at No. 8, but plenty for the people of Charlotte to be pumped about.

Like the Bengals at No. 5, the Panthers had several interesting scenarios at No. 8. The option I didn't see happening is the one they chose, however, as they went with my top-ranked corner Jaycee Horn and made him the first defender off the board. Maybe we should have seen it coming. After all, they used all seven of their picks on defense in last year's draft, Matt Rhule's first as coach, and then the Carolina defense had just seven picks last season. Rhule and new general manager Scott Fitterer are prioritizing that side of the ball. I probably would have gone with offense tackle Rashawn Slater to cement the left tackle spot, but I can't knock the pick much. Horn is a physical, aggressive corner who could be their No. 1 corner as a rookie.

I never thought the Panthers would go with a quarterback after they traded for Sam Darnold -- the Jets will get Carolina's 2022 second-rounder as the main asset in the deal -- and they committed to Darnold for 2022 by picking up his option on Friday. They also showed a commitment to helping Darnold with three Day 2 picks on offense. Terrace Marshall Jr. (59) reunites with offensive coordinator Joe Brady, who helped scheme up one of the best offenses in college football history at LSU in 2019. Marshall caught 23 touchdown passes in 2019-20. The Panthers' receivers struggled with drops last season, and Marshall is a nice No. 3 option. (They also traded down twice and still got him, adding extra assets, including a 2022 fourth-round pick from Houston.)

I wasn't as high on offensive tackle Brady Christensen (70) as a few others in the league, but he should compete for the left tackle job with free-agent signing Cameron Erving. Tommy Tremble (83) is a much better blocker than receiver, so Round 3 is rich for a blocking tight end. It is a need, though, as Carolina's tight ends combined for an NFL-low 204 receiving yards last season. I'm just not sure Tremble will help much as a pass-catcher in 2021.

Chuba Hubbard (126) is a good running back who will compete for a role behind Christian McCaffrey. Defensive tackle Daviyon Nixon (158) had a stellar season at Iowa, and he could be a fifth-round steal. Guard Deonte Brown (193) is a brick wall in the run game. My guy Todd McShay really liked wideout Shi Smith (204), whose numbers were limited because of inconsistent quarterback play. He could be a steal.

This is a quality class, headed up by two players who should help immediately.

Day 1: Jaycee Horn is the first defensive player selected in the 2021 NFL Draft. Horn, the son of former NFL receiver Joe Horn, is a truly elite press-man coverage cornerback. He is a physical nuisance who gets under the skin of receivers across from him. His press-man skills aren't quite a scheme fit with the Panthers, who like to play their cornerbacks in off positions, something Horn will have to improve on quickly at the next level.

Day 2: Marshall slid this far in the draft because of medical concerns, but on the field, he is a first-round talent and one of the few "big receivers" in this draft. Since the start of 2019, he has generated a perfect NFL passer rating of 158.3 when targeted. The LSU product has the potential to develop into a true No. 1 X receiver at the next level.

Christensen pairs high-end production (96.0 PFF grade in 2020) with high-end athleticism, testing at the 90th percentile or better across the board at his BYU Pro Day. His biggest concern entering the NFL is whether he can hold up at tackle with 32-inch arms. That's generally below the requisite threshold for starting tackles in the league, but Christensen may be worth a shot given Carolina's other options at the position. At worst, he should be a quality alternative to Pat Elflein at left guard.

Tremble has been one of the hot names coming out of draft analysts' mouths over the past few months - a throwback player who wills his opponents into submission with physicality and tenacity. He's not a receiver - more fullback than tight end - but he's a player you want on your roster. The Panthers now have a tone-setter on their offense.

Day 3: Daviyon Nixon stands out as one of the better values of the fifth round so far, even with him coming in significantly lower on PFF's Big Board than most around the industry. Nixon has quick feet and plays the position violently. He just didn't show much high-end on tape, posting middling PFF grades of 71.5 and 73.1 in his two seasons at Iowa. That becomes less of an issue with him coming off the board this late in the process.

Jaycee Horn fills a need for the Panthers at cornerback, and his coverage skills and physicality will help him make an immediate impact in the Carolina secondary. That said, offensive line was a more glaring need for the Panthers, who need to keep newly acquired quarterback Sam Darnold standing in the pocket next season. The Panthers didn't address the offensive line until the third round when they took BYU tackle Brady Christensen.

The Panthers had a bit of a rough start by taking Horn over Surtain and then offensive misfits Marshall and Christensen. But Tremble, Taylor, Brown and Smith helped raise the acquired rookie pool of talent at key positions for new GM Scott Fitterer, who needed good late results for their aggressive trade-down plan.