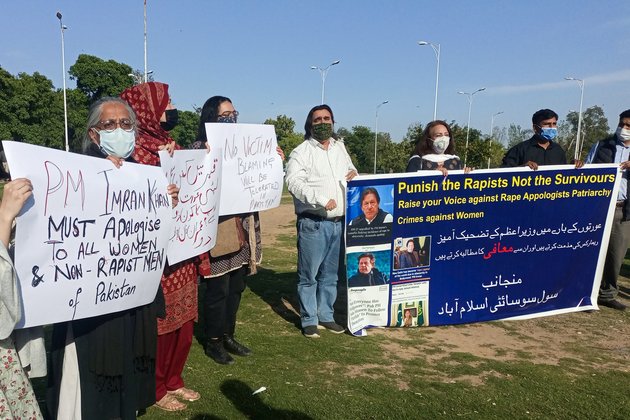 ISLAMABAD - Human rights and women's rights groups in Pakistan are demanding a public apology from Prime Minister Imran Khan for his statement linking women's clothing to causes of rape.

"This entire concept of veil in our religion (Islam) is to avoid temptation in the society. Not everyone in the society has the will power to control (himself). The more you raise the level of obscenity in a society, the more it'll have an impact," Khan said Sunday in a live television broadcast during which he was answering callers' questions.

In a protest held Thursday outside the National Press Club in capital Islamabad, activists expressed outrage and demanded a public apology.

"I feel that it is not just the women of Pakistan, it is also the men of Pakistan who have been slapped in the face by the prime minister because he said that men are unable to control themselves, they can't control the temptation of seeing women in public without being veiled," said activist Tahira Abdullah.

Earlier in the week, a statement of condemnation signed by hundreds including several rights groups, and circulated on social media, demanded not just an apology but also urgent gender sensitization training for the prime minister, his entire cabinet, and all members of the government.

"It is rape apologia to link the crime of rape, which is a crime of power and control, with "temptation" and "obscenity". This reflects a lack of understanding of the causes of sexual violence, provides justification and further emboldens those who perpetrate this heinous crime," the statement said.

"[W]hile expressing deep concern about it, the prime minister spoke about the societal responses and the need to put our efforts together to eliminate the menace of rape completely," the spokesman said in a written statement sent to media Wednesday.

It also said the prime minister remained committed to "utilize all avenues at the government's disposal to tackle the incidence of rape."

However, individuals and rights groups continued to demand an apology and said Khan showed a lack of understanding of the issue.

"If vulgarity was the reason for rape, Mr. PM, why would young boys in madrassah's get raped? What about the very young girls . . . and dead women, who are pulled out of their graves to rape. What vulgarity do they spread?" questioned Islamabad resident Fatima Atif at Thursday's protest.

"He needs to understand gender discrimination. Only then he will understand the severity of his statement. I think he does not understand what he has said and its repercussions on the society," he said.

FILE - Members of civil society groups take part in a rally to condemn the incident of rape on a deserted highway, in Karachi, Pakistan, Sept. 12, 2020.

The Human Rights Commission of Pakistan, a non-profit entity, said it was "appalled" by the remarks and said it showed a "baffling ignorance of where, why, and how rape occurs."

Khan, who was a cricketer of international fame, had a reputation as a womanizer before he turned to politics and became devoutly religious. He has since blamed sexual content and obscenity for an increase in rapes and a breakdown in family units.

"When I went (to Britain at 18 years of age), they used to have one divorce in 17 marriages. Today, they have a 70% divorce rate and increasing," he said.

In India, he said, the film industry was partly responsible for New Delhi being called the rape capital of the world.

Rights groups said his statements were equivalent to victim blaming.

"Rape is perpetrated by rapists and it's culture is strengthened by rape apologists. PM @ImranKhanPTI must apologize for this callous and damaging remarks and desist from blaming the victims," rights group Women's Action Forum wrote in its statement on Twitter.

One activist at Thursday's protest said it was time for Khan's supporters to step up.

"His voters need to hold him to account," said William Pervez. "Our voters have turned into blind supporters of their leaders."

Khan's British ex-wife, Jemima Goldsmith, hoped the remarks were a mistranslation of his words.

"The Imran I knew used to say, 'Put a veil on the man's eyes not on the woman'," she tweeted.

She also recounted an incident in Saudi Arabia years ago when an elderly woman told her she was harassed by young men while in her abaya and niqab (face covering) until she revealed her face.

"The problem is not how women dress!" Goldsmith said.