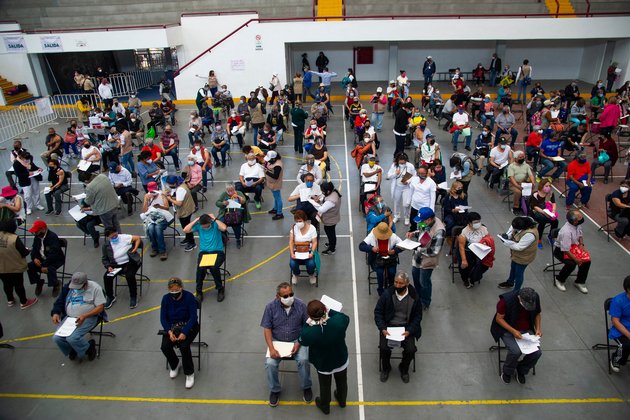 "The U.N. has to intervene because it's ... an ornament," he said. "Where is the universal fraternity?"

Fernandez, who is on a three-day state visit to Mexico, is hoping to develop a hemispheric strategy with Lopez Obrador to address the issue.

"It is fundamental that there is transparency and solidarity in the vaccine rollout," said Fernandez, who had previously discussed the topic with French President Emmanuel Macron and German Chancellor Angela Merkel. "I agree with what (Lopez Obrador) did at the U.N. - we have to look for a way to have quick access to the doses and that doesn't leave the poorest countries behind."

On February 15, Lopez Obrador urged the U.N. to call an "urgent meeting" to address vaccine hoarding by the countries responsible for vaccine production. He also pushed for the implementation of mechanisms to guarantee equitable access to vaccines and medications during the pandemic such as COVAX, a vaccine-sharing program co-led by the World Health Organization.

A health care worker administers a dose of the Oxford-AstraZeneca coronavirus vaccine, marketed by the Serum Institute of India (SII) as COVISHIELD, to a woman at a vaccination center in Buenos Aires, Argentina, Feb. 22, 2021.

"It is urgent to act, to reverse the injustice that is being committed, because the security of all humanity depends on it," Ebrard told the council.

As of last week, three-quarters of the world's first doses had been administered in only 10 countries. Those countries, however, account for 60% of global GDP, Ebrard added.

Mexico has administered at least 1.7 million vaccine doses, inoculating around 0.7% of its population, according to the Reuters COVID-19 Tracker. The country currently ranks third in the world in coronavirus deaths, with at least 180,000 Mexicans having died of COVID-19 since the beginning of the pandemic.