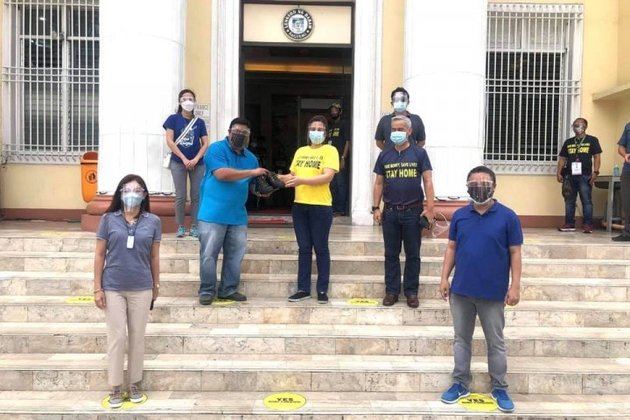 The donation is part of the "One Big Fight" projects under their ADDU HS '95 Rock The Knight Homecoming program last year. The batch hosted the 2020 Ateneo de Davao Grand Alumni Homecoming via online.

The batch was active in community-related initiatives during their year-long homecoming hosting last year. Among the projects included a donation of 95 pieces 3M half-mask respirators to the frontliners of the Southern Philippines Medical Center (SPMC). They also donated Personal Protective Equipment (PPEs) coats made from taffeta to medical frontliners in April last year.

"We believe in our frontliners, and we know a lot of people have been sacrificing in this pandemic especially the 911, and this is our way of giving it back to them as well," Pedro Quitain III, chairman of ADDU HS' 95 said of their safety shoes donation.

The shoes were specially ordered by the batch in Marikina. They are all-weather, anti-slip and water-proof boots with steel toes for added protection and EVA foam soles for cushion making it lighter and flexible.

"These are very nice safety shoes which is part of the requirements for safety in the workplace, we are thankful for the donation," says Emmanuel Jaldon, chief of the Davao City Central 911.

The batch formally gave their donations to the City Government of Davao on Feb. 16 the shoes were received by Mayor Sara Duterte-Carpio and Emmanuel Jaldon. (PIA/RG Alama)