Honours even after bowlers bring back Pakistan in 2nd Test 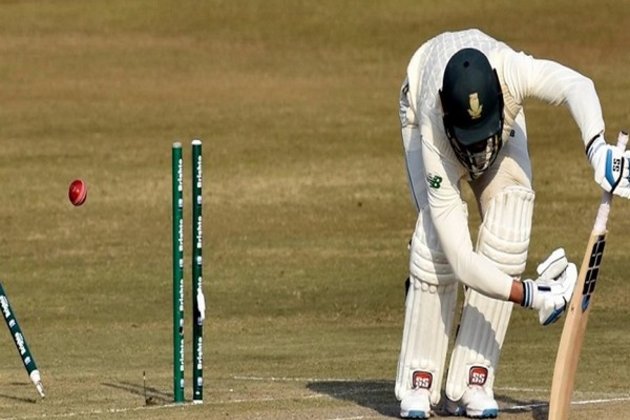 Rawalpindi [Pakistan], February 5 (ANI): Hasan Ali picked two while Faheem Ashraf and Nauman Ali struck a wicket each to bring back Pakistan in the second Test against South Africa on Friday.

Pakistan was bundled out for 272 in the first innings courtesy of a five-wicket haul by Anrich Nortje but the visitors soon handed away the advantage after losing four wickets in the third session on day two of the second Test.

After rain allowed for only 58 overs to be sent down on day one, normal service resumed on day two as the visitors claimed the last seven wickets of the hosts for just 127 to leave them all out for 272.

Faheem then proved to be the glue for the lower order as he recorded an unbeaten 78 off 160 balls (12 fours) as Nortje struck regularly around him to keep the total in check before Shaheen Shah Afridi was last man out for a duck.

Keshav Maharaj finished with three for 90 in 45 overs and Pakistan was dismissed in 114.3 overs. The Proteas' reply began smoothly initially as Dean Elgar and Markram reached 26 without loss two deliveries before tea when the former edged Hasan Ali (2/29) to wicketkeeper Mohammad Rizwan for 15.

The same bowler then struck the next ball by cleaning up Rassie van der Dussen for nought, shifting the momentum in favour of the hosts. Markram and Du Plessis started out solidly after the interval as they looked to rebuild and their partnership ran smoothly until the former captain tried to cut an Ashraf delivery that was too close to his body and ended up edging to the keeper for 17.

From 55 for three, Bavuma and opener Markram added a further 26, but that stand was also ended, this time when Nauman Ali outfoxed the latter to put Pakistan well on top.

South Africa skipper De Kock then struck a flurry of boundaries to get his side across 100 but with plenty to do on day three.