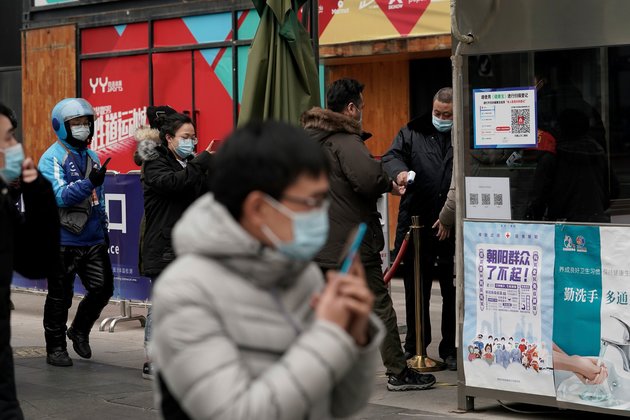 SEOUL, SOUTH KOREA - After months of negotiations and accusations that China was obstructing an independent investigation, a team of World Health Organization experts has landed in Wuhan, China, where they will try to uncover the origin of the coronavirus that has killed nearly 2 million people globally.

Chinese state media on Thursday reported the arrival of the WHO team, composed of researchers from top universities around the world, including experts in animal science and epidemiology. The 15-member team will spend about a month in China. At the insistence of Chinese authorities, the scientists will spend their first two weeks in quarantine.

Its goals are to discover how the virus emerged, how it transferred to humans, and how such outbreaks can be prevented in the future. Those tasks won't be easy; it has been more than a year since COVID-19 was first detected, with the initial outbreak linked to a Wuhan market selling wild animals for food.

Their task will also be tricky from a diplomatic and political perspective. Though China has promised to give WHO officials adequate access, Beijing has often become defensive and sought to deflect blame for the devastation brought by the global pandemic.

There have also been repeated delays in the arrival of the WHO experts. Earlier this month, the team was held up because of a visa issue that Chinese officials later attributed to a "misunderstanding."

Those delays continued Thursday. The WHO reported that two of its scientists are still in Singapore completing COVID-19 tests. Although it said all team members "had multiple negative PCR and antibody tests for COVID-19 in their home countries prior to traveling," two members tested positive for IgM antibodies, which the body produces as its first response to a new infection. It is not clear when the two scientists will arrive in China.

More than 120 countries have called for an independent investigation into the origins of the virus, with many governments accusing Beijing of not doing enough to contain its spread. Outgoing U.S. President Donald Trump has been especially outspoken, frequently speaking of the "China virus" and demanding the United Nations hold Beijing accountable.

But several members of the WHO team, as well as other officials in the global health agency, say their mission is not to assign blame.

"This is not about finding China guilty or saying 'it started here, give or take three meters.' This is about reducing the risk. And the media can help by avoiding Trump style finger-pointing," WHO team member Fabian Leendertz, a biologist at Germany's Robert Koch Institute, told The Guardian newspaper.

"Let this mission and let other missions be about the science, not about the politics," WHO Health Emergencies Program chief Mike Ryan said at a Monday press briefing." We are looking for the answers here that may save us in (the) future -- not culprits and not people to blame."

China for months rejected calls for an international probe. In July, China and the WHO finally agreed on a framework for the investigation. As part of that plan, China insisted on allowing its scientists to do the initial research, including testing sewage and blood samples and interviewing the earliest known coronavirus patients.

"It's not like nothing's been happening for the last 12 months. There's a lot that's been happening and a lot of evidence that's been generated. So one of the tasks of the WHO team is to go to China and meet with the scientists and to look at the evidence," said professor Archie Clements, an infectious diseases epidemiologist at Australia's Curtin University.

So far, China has not revealed publicly what its scientists have found. But many experts hope the WHO team will gain access to that data during the trip.

"A big part of this investigation is actually around developing relationships with people. Having that personal contact. Being able to ask questions privately in a safe environment. Building rapport. Having the sort of open-ended conversations that may bring out things that you hadn't previously anticipated might be important," Clements said.

But WHO officials have cautioned the team may not conclusively trace the exact origin of the virus. That's in part because, experts say, viruses change very quickly.

The coronavirus was first discovered in late 2019 in Wuhan in China's central Hubei province. Many experts believe the virus had long been present in bats but was transferred to humans via another wild animal sold at the Wuhan food market.

Some U.S. officials, including Trump, have suggested the virus may have accidentally emerged from the nearby Wuhan Institute of Virology, one of China's top research labs that had been studying bat coronaviruses for years. U.S. officials have offered no proof of that hypothesis.

China has been criticized for initially downplaying the seriousness of the outbreak and attempting to silence those who tried to speak out.

Perhaps most notably, Li Wenliang, a doctor at the Wuhan Central Hospital, was investigated and chastised by police for "spreading rumors" after he tried to warn fellow medical professionals about the disease. Li later died of the virus.

China also imposed strict controls on domestic conversation about the outbreak. A recent investigation by The Associated Press found that Chinese scientists have been barred from speaking to reporters and that the publication of any data or research must be approved by a task force managed by China's cabinet, under direct orders from President Xi Jinping.

In recent months, Beijing has repeatedly suggested the virus did not originate in China. Many state media reports now claim COVID-19 may have emerged in Italy, suggesting it was brought to China via frozen seafood. (The WHO says it is "highly unlikely that people can contract COVID-19 from food or food packaging.")

A team of Chinese scientists recently argued the virus originated in the summer of 2019 in India. In March, a Chinese foreign ministry official offered an unfounded theory the U.S. military may have brought the epidemic to Wuhan.

With disinformation and speculation abounding, many public health experts hope the WHO team will soon be able to offer some credible answers.

"What I would hope is that politicians, global leaders, give the investigative team some space to do their job, which is a scientific task," Clements said. "It isn't a political investigation."