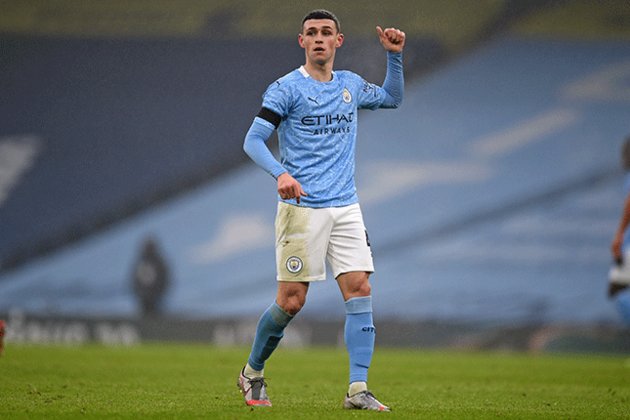 Phil Foden should be an automatic pick for England at this year's delayed European Championship after his outstanding season so far, says Manchester City manager Pep Guardiola.

The 20-year-old midfielder scored his eighth goal of the season as City beat Premier League strugglers Brighton 1-0 on Wednesday - their seventh successive win in all competitions.

City climbed to third spot in the table, just four points behind leaders Manchester United and one point adrift of Liverpool with a game in hand on the champions.

Guardiola praised his young match-winner, who is City's leading goalscorer this season.

"In the last few days, Phil has played against (Chelsea's Cesar) Azpilicueta, one of the most incredible defenders in the Premier League, and was outstanding," he said.

"It was the same against (Manchester United's). I am pretty sure he would be selected (for England) if it was me.

"(England manager) Gareth (Southgate), I don't know but I am sure he was really impressed by him, like all of us."

Foden first sprang to prominence when England won the Under-17 World Cup in 2017 and has since earned three senior caps.

"He is a guy with a special instinct close to goal, not just with the left foot, but with the right foot," said Guardiola.

"He deserves to play. His standards are higher. I have the feeling he lives his life 24 hours to play football.

"When you see his face he is happy at training sessions and playing games. When that happens the rest is what everyone sees in his performance."

Foden said he was enjoying the responsibility he was being given by Guardiola, adding that City were back in the groove after a slow start to the season.

"It definitely feels like we're back to our best," he said. "We've taken confidence from the last few results."