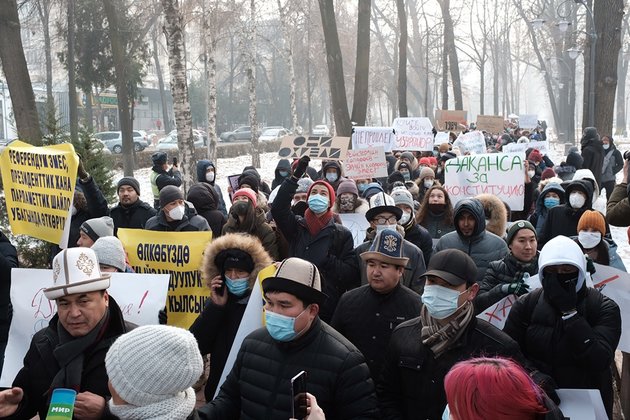 Hundreds of people rallied in below-freezing weather in Kyrgyzstan's capital on November 22 against proposed changes to the constitution that stand to hand sweeping powers to the president and lay the grounds for a new season of authoritarian rule.

Organizers from a group called Bashtan Bashta (Start With Your Head) say they plan to mount similar events every week until a January 10 referendum on the new-look constitution.

Participants gathered at the city's railway station at midday and gradually made their way to the central Ala-Too square, which has been the scene of much political drama in recent weeks.

On the way, they chanted "Country without a khan" and "No to dictatorship." Attendants also held up banners reading slogans like "Democracy in Kyrgyzstan: 404 not found", "No to the referendum", "The khan Constitution will not pass."

Police accompanied the rally, which passed without incident.

One demonstrator, 32-year-old Bishkek resident Adilet Usenov, told Eurasianet that he decided to take part because he is opposed to an overpowerful presidency.

"I am for parliamentarianism, because all developed and rich countries of the world live like this. And presidential forms of government are all dictatorial. If we want to live in a successful and rich country, we must develop parliamentarism," he said.

Aizada Karatayeva, 22, said she was particularly opposed to one planned and vague provision that would in effect ban any publications or events that contradict the "moral values" of Kyrgyzstan.

"In fact, this will be used in a different way, and later there will be bad times, like a dictatorship. We will have our own khan. If the media [is seen as contradicting] moral values, it can be criminalized," said Karatayeva.

The way in which the proposed constitution even came about is itself the subject of confusion and controversy.

It surfaced online last week and was supported by 80 members of the current parliament, but it is strongly suspected to be the work of the team of Sapar Japarov, who was until recently serving as both prime minister and acting president. The president is not by right entitled to advance a new constitution and all such initiatives should come from lawmakers.

Japarov stepped down earlier this month so that he could run in the presidential elections, which are taking place on the same date as the constitutional referendum. Changes to the constitution are widely perceived as intended to give him unrivaled power.

Defenders of the amendments contend they will bring certainty and clarity to the machinery of government, which they say is now hamstrung by confusion and ineffectiveness.