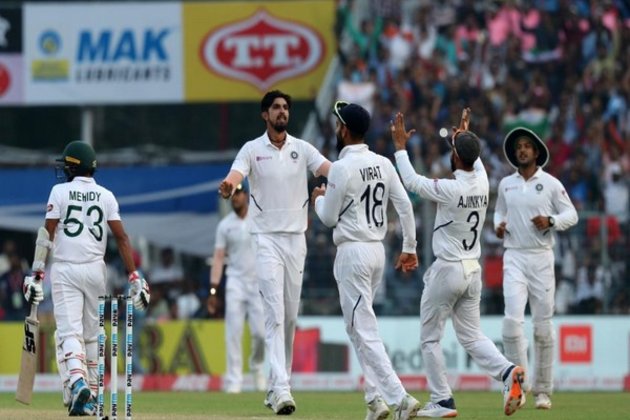 Umesh Yadav and Ishant Sharma displayed a clinical bowling performance as India defeated Bangladesh by an innings and 46 runs on the third day of the day-night Test.

With that win, India also clinched the two-match series by 2-0. That was the seventh consecutive Test series win and 12th home series win.

Ishant Sharma was named Player of the Match as he scalped nine wickets in the game.

Indian bowlers bundled Bangladesh at 106 in the first innings. The hosts posted a total of 347/9d in their first innings as skipper Virat Kohli played a knock of 136 runs while both Cheteshwar Pujara and Ajinkya Rahane scored fifty.

In the second innings too the visitors failed to perform with the bat and were all out at 195, handing an emphatic win to India.

India are set to play their second pink-ball Test in Australia after the limited-overs series.

India and Australia are slated to lock horns against each other in three ODIs, three T20Is, and four Tests and then both sides will shift their attention to the longest format of the game.

Kohli will just be playing one Test against Australia, and then he will head back home after being granted paternity leave by the Board of Control for Cricket in India (BCCI).

The first Test between India and Australia will commence from December 17 at the Adelaide Oval and this match will be a day-night contest.

The four-match series will be a part of the World Test Championship (WTC). Australia and India are at the top two spots in the WTC standings. (ANI)