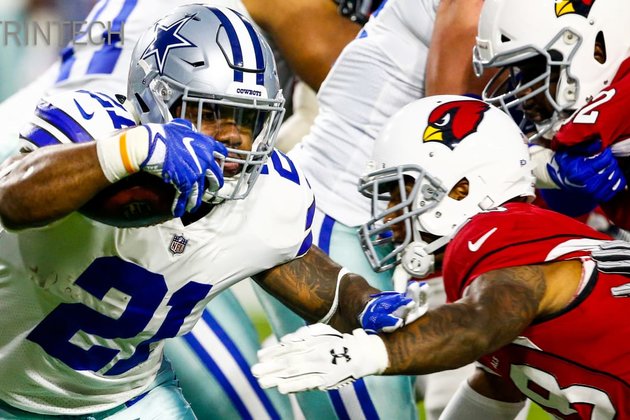 The Cowboys are playing host to two NFL superstars in DeAndre Hopkins and Kyler Murray, who is a perfect 7-0 at AT&T Stadium. But the Cardinals are 3-2 and yet to have a signature win while the Cowboys are 2-3 and haven't beaten a team that has won a game.

The bigger question is how the Cowboys bounce back from the loss of Dak Prescott and how Andy Dalton changes the look of his high-powered offense.

The DallasCowboys.com staff gives their 'gut feeling' for this Week 5 matchup:

Rob Phillips: The Cardinals' talent at the skill positions is really, really good - about as good as the Cowboys have faced so far. There are some difficult matchups, for sure. But Arizona has an issue similar to Dallas: both teams have a negative turnover margin heading into Monday night. The team that plays a cleaner offensive game and wins that battle probably wins the game. Just listening to the Cowboys coaches and players talk about Andy Dalton, you get the sense there's a quiet confidence he can step in and keep the offense moving. Sometimes in sports, when a leader goes down, teams seem to heighten their focus. My gut feeling is the Cowboys do that this week with Dak Prescott sidelined. I've got Dallas in a nail biter, something like 28-27.

David Helman: You're not crazy if you think the Cowboys can win this game. Even without Dak Prescott, this team is still plenty talented and still employs a plenty capable quarterback. I just can't quite convince myself that it's good enough. Not when you consider how much the Dallas defense has struggled this season, and not when you think about the problems that Kyler Murray might pose. It's scary enough that Murray will be throwing to DeAndre Hopkins. But the former Allen High School quarterback obviously possesses a freaky athleticism all his own. The Cowboys have struggled with discipline and communication all season, and that's problematic against a quarterback who is averaging 260 passing yards and another 60 rushing yards per game. I think Andy Dalton is going to play well - like, 300 yards and three touchdowns. I just think Murray is going to play better, and that's the difference in a 31-27 Cardinals win.

Nick Eatman: I know I shouldn't make decisions this way, but I just can't help it. People will tell you that history means nothing in sports, especially the NFL. I don't always agree because I do think there are reasons for certain trends. In this case, I think I'm just being stubborn. But I've covered the Cowboys now for over 22 seasons and I've seen the Cardinals come in here a half-dozen times. And for the most part, it just hasn't been close. The Cowboys have won five of those games by a combined score of 158-37. Now, the one loss occurred in 2014 and just so happened to have a redheaded backup quarterback in the game. Brandon Weeden didn't help the Cowboys much that day and they lost 28-17, one of just four losses this year. I do think Andy Dalton is better than that and I think the Cowboys will be in good shape with him having a full week of practice. I know I'm not supposed to think of the Cardinals as I have in the past, but what has really changed? Sure, Hopkins and Murray are beasts, but the Lions found a way to win. I know the Cowboys are struggling mightily on defense but I still think they can figure out a way to win this game on Monday night, and perhaps doing it for Dak. Give me the Cowboys 37-36.

Mickey Spagnola: More my mind than my gut, and that's always a debatable source for feel, but I'm thinking Andy Dalton is the best, most accomplished and still relevant backup quarterback the Cowboys have had this century, and as Cowboys owner Jerry Jones has suggested, maybe since signing Bernie Kosar in 1993. Dalton did show you what he's still got taking over for the Cowboys in the third quarter Sunday against the Giants and leading them on two field-goal drives for the win. Love his confidence and the confidence of those around him. Now he's not going to be out there playing singles, but if the offensive line holds up and the defense doesn't ask him to have to score 40 to win, Dalton will give the Cowboys just what they need at quarterback against the Cardinals.

Kyle Youmans: Thank goodness this is an article titled 'gut feeling' and not something along the line of 'head picks' or 'let's just choose the favorites.' There are so many matchup nightmares that Arizona brings to the table from their receiving corps led by DeAndre Hopkins, to their All-Pro secondary. While Pro Bowl linebacker Chandler Jones is not in the picture for the Cardinals, this pass rush still presents a massive challenge for an offensive line that is still finding their footing. Now that's all been said, I still think this is very much a winnable game against a young team that is still aiming to find a rhythm themselves. I mentioned last week that this is the stretch of the schedule that will determine how the 2020 season will go and that there are a lot of opportunities for wins. Monday night will take nothing less than the best game of the year from Dallas to see a win. But I think they rally around the situation they've been handed without Dak Prescott and play a more complete game. Give me the Cowboys, 41-33.

Details on all of the health and safety procedures you can expect at AT&T Stadium this season can be viewed at www.DallasCowboys.com/safestadium.