Spagnola: Andy Of Katy Not Your Typical Backup 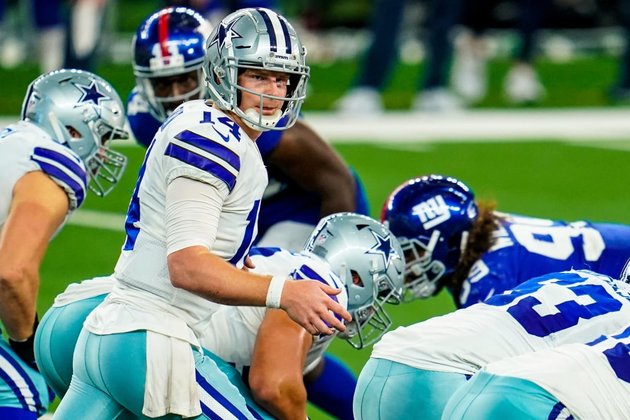 Now we'll find out if I knew what I was talking about. Er, writing about.

See, you can say something, and chances are your words dissipate into thin air. But when you put it down in writing, there's always a paper trail. Er, an internet trail.

So back on Aug. 26, 2020, turned in this piece on Andy Dalton for the Sept. 20 edition of The Dallas Cowboys Star Game Day program for the 2020 home opener, and very boldly wrote this about the newly-signed Cowboys backup quarterback:

Telling you, the best, most accomplished, still relevant and willing backup quarterback the Cowboys have ever had since veteran Wade Wilson was Troy Aikman's backup from 1995-97.

Who knew just short of two months later we're about to find out if this bold prediction was mere bluster or has some teeth? Embellishment is not my nature.

For Andrew Gregory Dalton, a true Texan from Katy, Texas, educated and athletically groomed at Texas Christian University, is now the starting quarterback of the Cowboys, beginning Monday night at AT&T Stadium against the Arizona Cardinals and an equally, but much younger, Texan quarterback, Kyler Murray.

Cowboys ironman starter Dak Prescott, after starting the first 69 games of his NFL career, hardly missing even a snap five games into his fifth year, is done for the season, suffering a compound fracture and dislocation of his right ankle this past Sunday against the New York Giants that was surgically repaired that night.

Time for the Cowboys to cash in on their $3 million insurance policy, and how prescient is their move to actually sign an accomplished, talented, experienced backup quarterback still in his prime - Dalton turns 33 on Oct. 29 - for the first time in eons. And nothing against the likes of Cooper Rush and Kellen Moore and Mark Sanchez and Brandon Weeden and Matt Cassell and Kyle Orton and Jon Kitna and Brad Johnson, and for goodness sakes, Tony Romo himself who became the backup to Drew Bledsoe in 2005 without having even thrown a pass in an NFL game, but we're about to find out if Dalton indeed is the best Cowboys backup quarterback in 23 years.

Or if I've been guilty of embellishment, though on paper don't you think Dalton, with only having played 24 snaps so far - 22 versus the Giants - must be considered the Cowboys' best free-agent signing of the year?

Look, it's one thing for Cowboys head coach Mike McCarthy to profess confidence in his backup quarterback. Or for teammate Michael Gallup to say, "He's a competitor, you know. He's come here to win. Every time he comes into the huddle, that's the first thing he says. 'I came here to win. I came here to play. So, let's do it.'

"So that's all I really need to know."

But how about this from Cardinals head coach Kliff Kingsbury, a Texan himself who knows all about Dalton's career, from Katy High to TCU to Cincinnati for nine years. And sure, we know opposing coaches never utter a discouraging word about an upcoming opponent, the former Texas Tech head coach saying of the Cowboys QB situation, "Then you bring in a guy who's been a Pro Bowler in Andy Dalton. A high-end starter in this league for many years. A tremendous talent. Very familiar with him coming out of Texas, TCU and ..."

This is where Kliff had me at and.

"And played against him last year against Cincinnati and he had a heckuva game."

Sure, the Cards beat Dalton and the Bengals, 26-23, on Oct. 6, 2019, though needed a 31-yard walk-off field goal by Zane Gonzalez to do so. But here is certainly what Kingsbury remembers most.

Arizona led, 23-9, with 7:07 to play. Then Dalton led the Bengals, who finished last season at 2-14, on a 10-play, 79-yard drive culminating in his 2-yard touchdown pass to Auden Tate with 4:08 left. During the 3:05 possession, Dalton completed eight of nine passes, his only incompletion coming when Cards corner Kevin Peterson sort of pushed his receiver Tyler Boyd to the ground.

Then with two minutes to go, Dalton dropped a 42-yard pass in a bucket to Boyd to tie the game at 23. Dalton finished completing 27 of 38 passes for 262 yards and two touchdowns, with a 107.6 QB rating.

So don't think Dalton's second-half performance against the Giants came out of nowhere, completing 9 of 11 passes for 111 yards, with a 108.7 QB rating while leading the Cowboys on field-goal drives to tie the game at 34 and then to walk off with a victory in his Cowboys extended debut.

"Andy, he's a seasoned vet," Gallup says. "He's been in the league for a while. He can play the game, so it wasn't anything too big when he came in like that. We know what he's capable of doing, so you just go like normal."

In fact, Dalton is one of just six quarterbacks since the start of his rookie year in 2011 to throw for 30,000 yards, 200 touchdowns and win at least the 70 games he did, putting him in the fancy company of Drew Brees, Aaron Rodgers, Tom Brady, Matt Ryan and Ben Roethlisberger.

So let's get over this preconceived notion that the Cowboys have to dumb down the offense with Dalton in charge, like becoming overly run-oriented, simply relying on Ezekiel Elliott to protect Dalton. Hey, the Cowboys understand Zeke's threat, having rushed for 364 yards these first five games, ranking sixth in the NFL, but just 13 yards from second, Vegas' Josh Jacobs at 377 with 17 more carries.

This is why the Cowboys signed Dalton. He's not like the 40-year-old, 17-year veteran Vinny Testaverde was when showing up for backup duty in 2004 that turned into a starting gig after the Cowboys cut ties with starter Quincy Carter in training camp.

"The changes are not dramatic," McCarthy said of Dalton now taking over for good after his relief performance against the Giants, leading the Cowboys to that come-from-behind, 37-34, victory. "Andy has obviously a tremendous amount of experience, so there is no concept that we'd lean away from.

"Frankly, the biggest change in the role and responsibility is for Ben DiNucci in the second seat."

Maybe, for a change, the Cowboys don't have to fear the backup quarterback, as they once did ever since the late Wilson sat in that seat from 1995-97, for sure a checkered past during these past 22 seasons. During that span, only Jason Garrett and Romo ended up with winning records as true backups, Jason going 6-3 during parts of four seasons when he was considered the immediate backup, and Romo 6-4 in his two immediate backup seasons.

Plus, how about this list of who's not after Garrett, the player, departed following the 1999 season: Randall Cunningham, Anthony Wright, Ryan Leaf, Clint Stoerner, Chad Hutchinson, Drew Henson Brad Johnson and Stephen McGee, along with Romo who wasn't the Romo we'd come to know.

And if you want to go back to 1989, when Jerry Jones bought the team, only Steve Beuerlein (4-0) and Rodney Peete (1-0) had winning records in backup-role starts.

See where I'm coming from with Dalton?

This guy is not coming off his couch for a retirement job. As Zeke says of Dalton, "Like I said, he's been a starter in this league and he could be a starter on other teams, so I don't think anyone has to press or has to do anything out of the ordinary. I think we just have to be ourselves."

Most of all, Dalton has confidence in himself. In his mind, and somewhat thanks to a pandemic-influenced season, he's in between starting jobs.

"I believe I'm a starter in this league," the nine-year Bengals starter said on a conference call following his signing. "And I feel like I could bring a lot to the table. I know I'm on a one-year deal. I understand the market's going to be a little bit different next offseason.

"Hopefully, this sets me up for my future."

Well, the table is his. So is the opportunity.

Now, owner Jerry Jones wants to go back further than Wade Wilson when it comes to backup quarterbacks during his era, insisting Dalton is the most accomplished, experienced and still with years left backup QB since the Cowboys signed Bernie Kosar midseason in 1993 at 30 years of age.

"We couldn't be in better shape than to have Andy Dalton step in," Jones said, accentuating his point by going on to say, "He is a starting quarterback."

Details on all of the health and safety procedures you can expect at AT&T Stadium this season can be viewed at www.DallasCowboys.com/safestadium.