Bolivia to choose new president after year of post-Morales upheaval 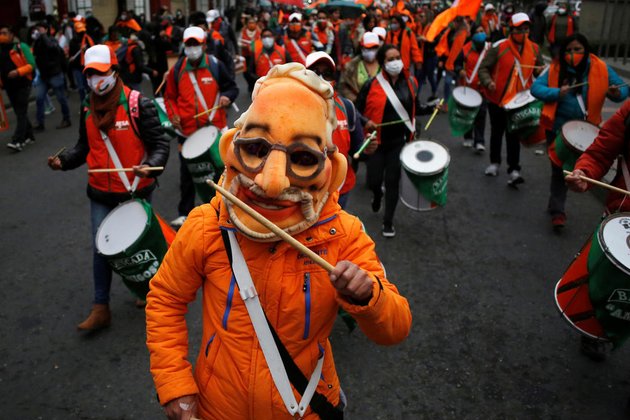 Bolivia votes in the first round of presidential elections on Sunday - 12 months after disputed polls sparked mass protests and the downfall of the country's controversial leftist leader Evo Morales. FRANCE 24 takes a look back at the Latin American country's year of turbulence.

The frontrunners are centrist ex-president Carlos Mesa and Luis Arce, Morales' anointed successor and candidate for his left-wing MAS party. Polling data predicts that Arce will come out on top in the October 18 first round - but without the 40 percent vote share and 10 point lead required to avoid a runoff on November 29.

Analysts forecast Mesa triumphing in the second round, propelled over the line by the "anyone but MAS" slogan popular amongst much of Bolivia's middle class. The five other candidates, all lagging in the polls, are all expected to back Mesa.

"While the margin will be close, we remain of the view that Mesa will take the race to a 29 November runoff, which he would be favoured to win," Filipe Gruppelli Carvalho, Bolivia analyst at consulting firm Eurasia Group, told Agence France-Presse.

These presidential elections come one year after Morales claimed a fourth term in October 2019. Fears of a stolen vote emerged when officials suddenly stopped releasing results hours after polls closed. The tally was putting Morales ahead of Mesa, his closest challenger, but well short of the lead he needed to avoid a second round. A day later, the electoral commission abruptly sent out new figures showing Morales just 0.7 points shy of the threshold to win on the first round.

Mesa accused Morales of engaging in "monumental fraud". Morales accused Mesa of using foreign support to wage a coup d'etat. Nationwide protests broke out, with anti-government protesters storming two state-run media outlets, accusing them of being in Morales' pocket. An audit by the Organisation of American States on November 9 uncovered "clear manipulation" of the count.

Morales resigned the next day, claiming political asylum in Mexico as clashes between his supporters and opponents continued to rage on the streets of the capital La Paz. Now living in Argentina, the former president continues to accuse "putschists" of illegitimately kyboshing his re-election.

The ex-president is no stranger to controversy. In a 2016 plebiscite, Bolivians narrowly rejected a proposed constitutional amendment that would have enabled him to run for a fourth term. The Supreme Court overturned that vote in a fiercely disputed decision, ruling that the constitution violated Morales' human rights in blocking him from seeking another term. "Morales had firm control over the state's main institutions, and it was pretty clear that manipulation was going on," said Colin Harding, director of specialist publication Latinform.

The referendum affair tarnished the considerable international reputation Morales had built since becoming Bolivia's first indigenous president in 2006. The country's GDP expanded at more than 4 percent per year during his thirteen-year reign, as the resource-rich nation reaped a global commodity boom. "Morales really benefitted from beneficial economic circumstances; high commodity prices helped very much," Harding noted. At the same time, he continued, Maduro's "economic policies were not nearly as radical as his rhetoric, and he did well to attract a lot of foreign investment".

Soon after Morales' ouster, it was his right-wing opponents who stood accused of an illicit power-grab. Jeanine Anez, a conservative vice-president of the Senate, declared herself acting president on November 13. Anez was fifth in the line of succession, but those above her had stood down - although some Morales loyalists then tried to annul their resignations. She took office despite the lack of parliamentary quorum, caused by MAS parliamentarians' boycott of the vote to appoint her.

The day after taking office, Anez announced that elections were forthcoming, without specifying a date. She added that Morales would be barred due to his unconstitutional decision to stand for a fourth term. Demonstrations rumbled on over the following weeks, this time as Morales supporters rallied to demand Anez's resignation. The deadly protests prompted Bolivia's influential Catholic Church to demand that the two sides meet for negotiations.

In December, Bolivian prosecutors brought charges against the exiled Morales on grounds of "sedition" and "terrorism", accusing him of ordering his supporters to engage in street violence. Later the same month, Morales' then host Mexico accused Bolivia of "intimidating" embassy staff working in La Paz after the Mexican government gave diplomatic protection to nine of Morales' former ministers who faced criminal charges.

Upon taking office in November, Anez said she was uninterested in standing for president in the upcoming elections. In early January, she named a date for the polls: May 3. Later the same month, she reneged on her earlier statement and announced her candidacy. Anez's communications minister Roxana Lizarraga resigned, saying that she had "lost sight of her objectives" and had "started to fall into the same evils" as her predecessor Morales. Hours later, Anez asked all of her ministers to resign.

"Anez really didn't help matters," Harding said. "She was an obscure politician who quickly emerged at the height of government, who found that she rather liked it there and didn't want to return to obscurity."

Then the coronavirus struck. Anez imposed a two-week lockdown on March 21 - and announced the postponement of the May elections to September 6. Covid-19 hit Bolivia relatively hard. The countries has recorded more than 8,000 deaths and some 137,000 cases out of a population of 11.6 million people - facing shortages of tests, protective equipment and intensive care beds, with what has been a rickety health system since Morales' tenure.

Anez announced that she had tested positive along with seven of her ministers in early July. Two weeks later, her government announced a second election delay, this time until October 18. This provoked a further round of protests, with Morales supporters blocking roads across Bolivia. The government said this caused the deaths of at least 30 people by obstructing oxygen supplies to hospitals. Anez failed to improve her popularity ratings in the polls during this period. Consequently, she announced her withdrawal from the presidential race on September 18.

Sunday's polls will be watched closely for any sign of impropriety. On Friday, UN High Commissioner for Human Rights Michelle Bachelet implored all actors involved in the elections to ensure a fair and peaceful vote - adding that the elections "represent an opportunity to really move forward on social and economic fronts, and to defuse the extreme polarisation that has been plaguing Bolivia over the past few years".