Evidence in support of WikiLeaks founder disrupted by technical faults 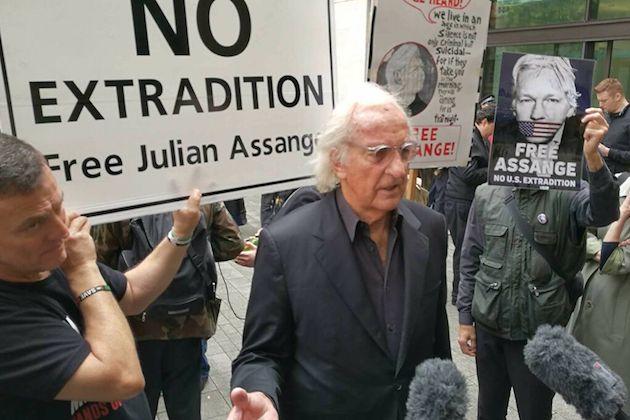 LONDON, UK - Technical difficulties disrupted evidence in support of WikiLeaks founder Julian Assange on Monday, as the hearing considering his extradition to the United States continues in London.

Assange is facing 18 charges of violating the Espionage Act, and if convicted could spend up to 175 years in prison.

"No publisher of information has ever been successfully prosecuted for publishing national security information ever," Lewis told the packed hearing at the Old Bailey in central London on Monday.

"Under the best-case scenario we are looking at a sentence somewhere between, 20 years, if everything goes brilliantly to 175 years," he said.

Lewis's testimony went for one-and-a-half hours but after the link broke twice, the judge adjourned the hearing until Tuesday.

Celebrated investigative journalist John Pilger (meantime) meantime has given a stirring speech outside the court which he has attended every day in support of the besieged Assange who is now detained in Belmarsh Prison.

Following is the transcript of that speech:

"When I first met Julian Assange more than ten years ago, I asked him why he had started WikiLeaks. He replied: "Transparency and accountability are moral issues that must be the essence of public life and journalism."

I had never heard a publisher or an editor invoke morality in this way. Assange believes that journalists are the agents of people, not power: that we, the people, have a right to know about the darkest secrets of those who claim to act in our name.

It is this morality of purpose that so threatens the collusion of powers that want to plunge much of the world into war and wants to bury Julian alive in Trumps fascist America.

In 2008, a top secret US State Department report described in detail how the United States would combat this new moral threat. A secretly-directed personal smear campaign against Julian Assange would lead to "exposure [and] criminal prosecution".

The aim was to silence and criminalise WikiLeaks and its founder. Page after page revealed a coming war on a single human being and on the very principle of freedom of speech and freedom of thought, and democracy.

The imperial shock troops would be those who called themselves journalists: the big hitters of the so-called mainstream, especially the "liberals" who mark and patrol the perimeters of dissent.

And that is what happened. I have been a reporter for more than 50 years and I have never known a smear campaign like it: the fabricated character assassination of a man who refused to join the club: who believed journalism was a service to the public, never to those above.

Assange shamed his persecutors. He produced scoop after scoop. He exposed the fraudulence of wars promoted by the media and the homicidal nature of America's wars, the corruption of dictators, the evils of Guantanamo.

He forced us in the West to look in the mirror. He exposed the official truth-tellers in the media as collaborators: those I would call Vichy journalists. None of these imposters believed Assange when he warned that his life was in danger: that the "sex scandal" in Sweden was a set up and an American hellhole was the ultimate destination. And he was right, and repeatedly right.

The extradition hearing in London this week is the final act of an Anglo-American campaign to bury Julian Assange. It is not due process. It is due revenge. The American indictment is clearly rigged, a demonstrable sham. So far, the hearings have been reminiscent of their Stalinist equivalents during the Cold War.

Today, the land that gave us Magna Carta, Great Britain, is distinguished by the abandonment of its own sovereignty in allowing a malign foreign power to manipulate justice and by the vicious psychological torture of Julian - a form of torture, as Nils Melzer, the UN expert has pointed out, that was refined by the Nazis because it was most effective in breaking its victims.

Every time I have visited Assange in Belmarsh prison, I have seen the effects of this torture. When I last saw him, he had lost more than 10 kilos in weight; his arms had no muscle. Incredibly, his wicked sense of humour was intact.

As for Assange's homeland, Australia has displayed only a cringeing cowardice as its government has secretly conspired against its own citizen who ought to be celebrated as a national hero. Not for nothing did George W. Bush anoint the Australian prime minister his "deputy sheriff".

It is said that whatever happens to Julian Assange in the next three weeks will diminish if not destroy freedom of the press in the West. But which press? The Guardian? The BBC, The New York Times, the Jeff Bezos Washington Post?

No, the journalists in these organisations can breathe freely. The Judases on the Guardian who flirted with Julian, exploited his landmark work, made their pile then betrayed him, have nothing to fear. They are safe because they are needed.

Freedom of the press now rests with the honourable few: the exceptions, the dissidents on the internet who belong to no club, who are neither rich nor laden with Pulitzers, but produce fine, disobedient, moral journalism - those like Julian Assange.

Meanwhile, it is our responsibility to stand by a true journalist whose sheer courage ought to be inspiration to all of us who still believe that freedom is possible. I salute him."