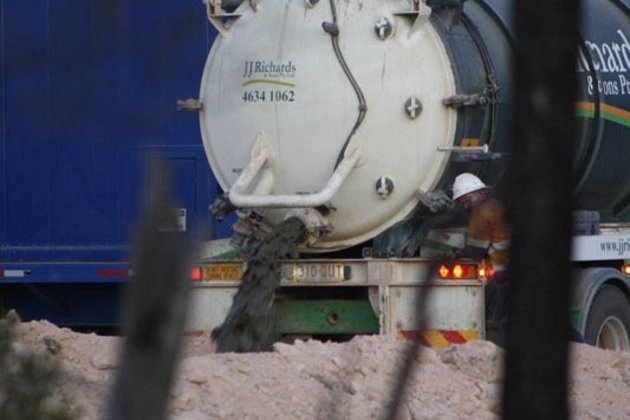 IN FEBRUARY 2017, Santos NSW finally lodged its Environmental Impact Statement (EIS) for the Narrabri Gas Project. It failed to provide the NSW Planning Department with some of the required information, particularly in regards to waste. Then, in 2018 after receiving 22,700 written objections, Santos produced their response and again omitted waste disposal plans.

Now in 2020, the NSW Planning Department's Assessment Report describes Narrabri Gas as 'approvable' despite Santos providing no details on their plan to dump huge quantities of salt waste or "crystalised brine" at landfills close to the project area. Researchers contacted local landfill managers who indicated they had not been approached by Santos and would not take their waste. Most councils have a policy of not taking waste from outside their local government area.

Santos has been telling a different story, but paradoxically they do mention in their EIS that 'most of the facilities [landfills] are intended for domestic waste from nearby towns and properties and therefore have limited capacity for additional waste'. This was backed up by Tony Meppem, ex-Planning Director for Narrabri Shire Council who indicated that Narrabri Landfill is only licenced to take 12,000 tons of general waste per year (and is currently being expanded).

Based on the NSW Government's failure to comply with safety recommendations, the Narrabri Gas Project is unsafe and should be halted.

The general solid waste classification is for waste like glass, plastic, rubber, plasterboard, ceramics, bricks, concrete, metal or paper which are not soluble.

Professor Stuart Kahn in his presentation to the Independent Planning Commission stated the waste management regulatory regime is:

What exactly is this waste?

The extraction of coal seam gas (CSG) generates enormous volumes of what the industry calls "co-produced water". It is extremely salty, cannot be used by farmers and contains heavy metals and other potentially hazardous substances, including radionuclides like strontium, uranium and polonium and elements such as fluoride, barium, cadmium and boron.

The co-produced water is drawn up from the coal seams as part of dewatering the seam to allow the gas to flow. Once on the surface, it is conveyed via gathering lines to treatment facilities. The waste is treated via reverse osmosis. This produces two further waste streams. The first is termed "treated water" or "permeate" and can lawfully be used for construction and drilling, dust suppression, stock watering and crop irrigation. It is proposed that it can also be dumped into Bohena Creek (managed release) in times of high rainfall.

The remaining waste stream (termed reject or retentate) needs further treatment. Santos proposes to build a "brine crystalliser", which uses lots of energy to turn the salt and other substances into a solid waste. The salt may be crystalised but it is still soluble. This waste is then ameliorated with extra chemicals to enable it to be dumped as a general solid waste at landfill.

According to the EIS:

How long will it be stored on-site for? Like other operators in Queensland, will Santos' purpose-built storage facilities stop this waste leaching into the groundwater? Disposal of this waste risks contamination of soil and water resources. It's expensive and is another uncalculated cost.

The Water Expert Panel noted in the NSW Planning Assessment Report that concentration levels of some Chemicals of Potential Concern (COPCs) in the produced water and their fate in the treatment process are not provided in the Narrabri Gas Project's EIS. The panel questioned Santos' assumption that this waste is general solid waste which can be disposed of in landfill. Instead, they inferred it may have to be classified as hazardous waste, which has to be disposed of in a special facility at a greater cost.

A proposed gas project in NSW is raising a lot of questions concerning the project's management.

Despite a lot of money and research, viable solutions for the beneficial use of toxic salt waste have been slow to emerge.

As detailed in this article in 2018, a company called Xenith Consulting were given a $140,000 grant by the Queensland Ignite Fund to develop a concrete substitute partly composed of this waste. However, the company's patent has now lapsed. "Xencrete" was to be a concrete substitute.

Earlier this year, a Government Information (Public Access) request revealed that Santos NSW attempted to provide soda ash brine to Aeris Resources, who operate the Tritton and Murrawombie copper mines near Girilambone, NSW. The soda ash brine was thought to be 'an efficient source of alkalinity' and RGS Environmental, a leading consultancy specialising in mining waste and rehabilitation, were engaged to perform studies.

Aeris Resources wanted to know what approvals they needed to conduct alkaline flush site trials with Santos brine. They wanted to treat tailings ponds which are acid with Santos brine waste which is alkaline. At the time of writing, this trial had not been EPA approved but last October, Santos indicated to participants on a Country Women's Association bus tour that negotiations were continuing.

Australia's only producer of soda ash and sodium bicarbonate, the Penrice Soda Plant in Adelaide, closed in 2014, leaving a pile of waste for South Australian taxpayers to clean up. Before it was demolished, an auction was held enabling these images to be taken by Autopsy of Adelaide.

The latest attempt by Santos to get rid of its waste was to enter into an MOU with U.S. company Natural Soda earlier this month. A "concept study" to inform a final investment decision to produce sodium bicarbonate in Narrabri has no completion date.

Natural Soda produces various personal care items like toothpaste and bath bombs. The timing of this announcement could be construed as a half-baked attempt to influence the final determination of the Narrabri Gas Project by the Independent Planning Commission who toured the site with Santos the day of the announcement. When Natural Soda was contacted for more information about the agreement they referred all questions to Santos.

Natural Soda is owned by Sentient Equity Partners, Australian-based players who also own Rincon, a Canadian company. Sentinel can be easily linked to the Australian Minerals Council/PriceWaterhouseCooper and Deloitte. They helped start the CSG industry in Queensland. Sentinel is registered in the Cayman Islands. Rincon has worked with ANSTO to develop techniques to deal with lithium salts and were involved in lead recycling in Australia.

When will an investment decision be made on the feasibility of a sodium bicarbonate factory? Santos has dangled yet another carrot under the nose of the Narrabri community who are desperate for local jobs. The proposal is only at concept stage and based on the number of previous failures, it is highly unlikely the "concept" will ever be realised.

The gas industry continually proposes "new" beneficial uses for waste as a way to gain approval to operate. To date, all have failed. Meanwhile, volumes of salt waste increase and become a feature of the landscape as more storage ponds are built to accommodate it.

How much waste is there?

The estimation of toxic salt produced by the project has doubled to 840,000 tons since the EIS was published in 2017. Calculations on waste are complicated because produced water and toxic salt are not the only waste from the process of extracting gas from coal seams. Drill cuttings are known to contain drilling chemicals and naturally occurring harmful substances.

There are two types of drill cuttings: rock-based and coal-based and each has a different disposal pathway. The rock-based cuttings will be disposed of in-situ via a process known as "mix, turn, bury" and will average out at 1,700m3 per month. Santos estimates around 3,000m3 coal-based cuttings will go to landfill per month, which during the drilling period would be about 165 tons per day or four B-Double loads.

Other waste would include green waste, sewage, drilling fluids and their containers and waste maintenance and construction materials, including the vast plastic pond linings as they tear and need replacing.

CSG waste trail: Where has all the contaminated fracking filth gone?

Santos' Vision Statement, aimed at shareholders, claims the company will 'become the market leader in running the safest and lowest cost [gas] facilities and infrastructure operations' in Australia. Is waste disposal an area where Santos will try to cut costs in order to deliver this aim to their shareholders?

The IPC has sought clarification on the disposal and reuse of the revised salt volumes, likely management options, their potential impacts and the intended post-approval process. It's imperative that the IPC examine this singular issue in depth. Logically, the unsustainable volumes of waste with no tried and tested treatment or disposal pathway should be a good enough reason to reject the Narrabri Gas Project.

Doubts over viability of new mining and gas projects

Last week in Narrabri, Santos signed a 'Heads of Agreement' with Perdaman to 'further study and design a Perdaman ammonium production facility".

Johanna Evans is currently campaigning for the State of NSW to become CSG free and for a statewide ban on unconventional gas. She is a volunteer for North West Protection Advocacy. You can follow Johanna on Twitter @jo_noCSG.