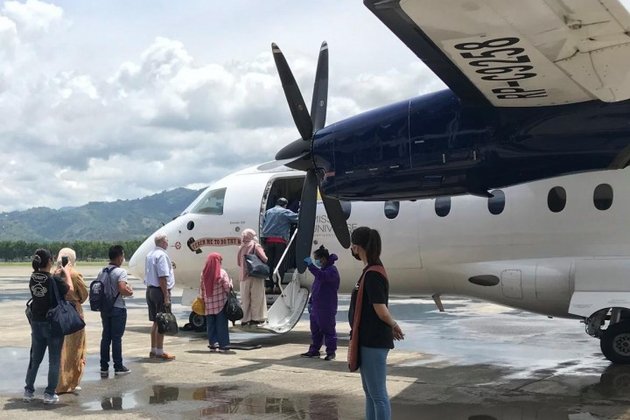 ZAMBOANGA CITY, May 22 (PIA) - Seven foreigners and 24 Overseas Filipino Workers (OFWs) who were stranded in Zamboanga Peninsula finally flew for Manila via a chartered flight early this week en route to their countries of destination.

Earlier, several tourists were flown from the city to Manila awaiting for flights to their home countries.

In a press statement, the Department of Tourism (DOT) Region 9 said the foreigners comprise of 3 Americans, 3 Canadians and a Taiwanese. The 24 OFWs come from different areas in the region who are required by their foreign employers to return to work in their countries of assignment.

DOT Mindanao Assistant Secretary Myra Paz Valderrosa-Abubakar facilitated the sending-off of the passengers on Monday (May 18) via the Zamboanga International Airport.

Meanwhile, passengers bound for areas in Zamboanga Peninsula must coordinate with the local tourism offices of the provinces, cities or municipalities where they are currently stranded in.

The DOT gives credit to its partners in helping the stranded tourists and OFWs including Platinum Skies Aviation, Inc., Civil Aviation Authority of the Philippines (CAAP), Department of Foreign Affairs (DFA) Region 9, Overseas Workers Welfare Administration (OWWA) Region 9, and the City Government of Zamboanga. (RVC/DIS/PIA9-ZAMSULTA, with reports from Hannah Segovia-DOT9)