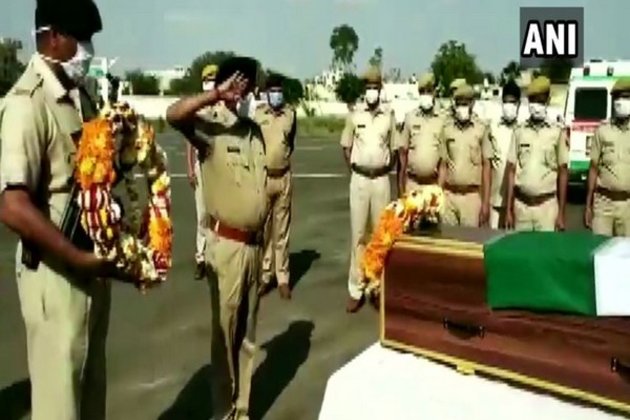 Jhunjhunu (Rajasthan) [India], April 7 (ANI): The mortal remain of paratrooper Chhatrapal Singh was on Monday brought to his native place in Jhunjhunu.

He is one of the five Indian Army jawans who lost their lives on April 5 during close combat with Pakistan supported infiltrators along the Line of Control (LoC) in Keran sector.

Army spokesperson Col Aman Anand on Monday said the troops had launched a daring operation at the LoC and engaged Pakistan supported infiltrators in close combat in heavy snow and neutralised the entire infiltrating batch of five terrorists.

Four soldiers under the command of a Junior Commissioned Officer (JCO) from one of the most professional Para Special Forces Units were airdropped near the LoC after the information about the infiltrators was received. The incident took place on Sunday.

"An intense hand to hand battle ensued and all five terrorists were eliminated," the spokesperson said.

In this battle, however, Army lost five of its best soldiers, three on the site and two more succumbed while they were airlifted to a nearby military hospital.

"The Special Forces squad was led by Subedar Sanjeev Kumar and included Havildar Davendra Singh, Paratrooper Bal Krishan, Paratrooper Amit Kumar, and Paratrooper Chhatrapal Singh. Indian Army salutes the brave hearts killed in action and shall continue to protect its borders from inimical forces at all costs at all times," he said.

The operations were launched on Saturday to trace the five infiltrating terrorists, who were tracked using Unmanned Aerial Vehicles and other gadgetry. (ANI)