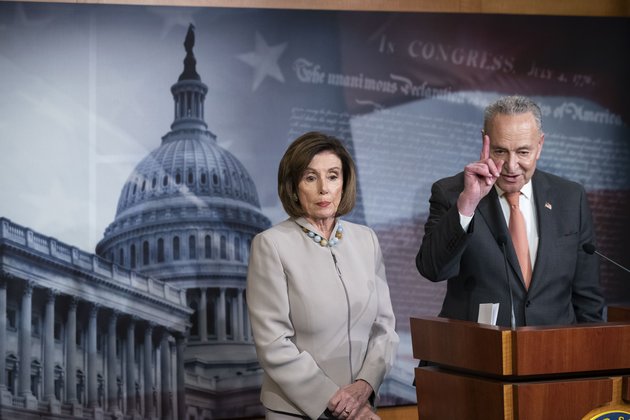 CAPITOL HILL - U.S. President Donald Trump said Tuesday the United States has the coronavirus is "very well under control" within its borders, even as his administration is asking U.S. lawmakers for $2.5 billion in emergency funding to address the problem.

Congressional Democrats say the Trump administration has failed to respond quickly to the spread of the virus, including personally spreading false information when Trump said coronavirus would stop in April when the weather grew warmer. The global health crisis is yet another battle in the ongoing war between Trump and Capitol Hill after Democrats failed to remove the president in a Senate impeachment trial earlier this year.

The president's latest reassurances about the virus came after a difficult day on the U.S. stock market. The Dow Jones had its sharpest daily decline since 2018, amid growing global fears about the spread of the coronavirus. The United States has 14 confirmed cases of the virus, according to the Center for Disease Control.

The administration's $2.5 billion emergency funding request sent to the U.S. Congress Monday is divided between $1.25 billion in new emergency funds and $1.25 billion in funds that will be diverted from other federal programs. The administration is also asking U.S. lawmakers to shift $535 million in funding for the treatment and prevention of the Ebola virus to addressing the coronavirus.

"Too little, too late," Senate Minority Leader Chuck Schumer said of the president's emergency funding request Monday. "We've seen no sign that President Trump has any plan or urgency to deal with the spread of the coronavirus-we need real leadership and we need it fast."

In a tweet earlier on Tuesday, Trump characterized Schumer's criticism as "for publicity purposes only" and said the Democratic lawmaker's response to the budget request was driven in part because "he didn't like my early travel closings."

"Americans need a coordinated, fully-funded, whole-of-government response to keep them and their loved ones safe," Pelosi said in a statement late Monday. "The President's request for coronavirus response funding is long overdue and completely inadequate to the scale of this emergency."

She said the Democratic-majority House of Representatives will work quickly to move their own funding package that "fully addresses the scale and seriousness of this public health crisis."

But Senate Republicans say they are satisfied with the administration's response following a closed-door briefing on coronavirus on Tuesday.

"The administration is on top of this," said Republican Senator Bill Cassidy, who is also a medical doctor. "They're adapting as they need to, trying to allocate resources where they're most effective."

Cassidy noted that if the administration's current emergency funding request is not adequate, additional money can be added on to the continuing resolution that lawmakers anticipate will fund the government as well as the 2021 budget request that is also being negotiated.

"Let's see how it evolves and then we can easily put more dollars in," he said.

Democratic Senator Dick Durbin said that while the administration's 2021 budget request was "completely backwards" in terms of cutting funding to key U.S. health agencies, it was difficult to say if the emergency funding request would be enough to address the threat.

Trump companies to be included in Covid-19 bailout package

WASHINGTON, DC - As part of the $2.2 trillion stimulus bill signed into law after it passed the House of ...