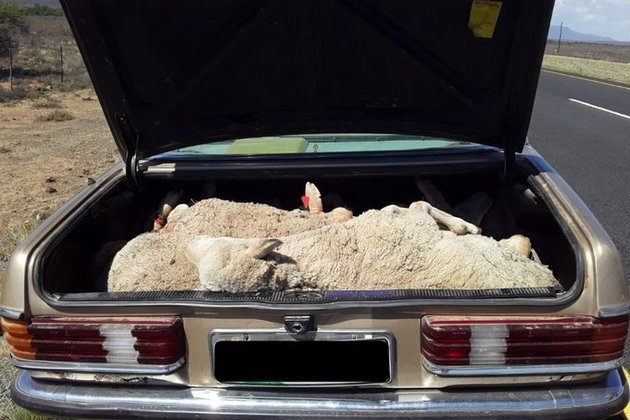 A kicking noise coming from the boot of a Mercedes-Benz led Eastern Cape police officers to uncovering suspected stolen sheep stuffed inside it.

Officers patrolling on the N9 from Graaff-Reinet to Aberdeen had seen the vehicle parked along the road on Sunday and the owner claimed he was stuck without petrol, said police spokesperson Captain Khaya Tonjeni.

When officers heard a noise, they opened up the boot and found four sheep inside it.

Tonjeni said two men, aged 35 and 52, were arrested and the vehicle was also confiscated.

They were expected to appear in the Graaff-Reinet Magistrate's Court facing a charge of possession of suspected stolen stock/property.

The owner of the sheep, who is also from Aberdeen, was expected to identify his livestock soon.

Eastern Cape provincial commissioner Lieutenant General Liziwe Ntshinga commended the officers for their vigilance and subsequent arrest of the suspects.

Ntshinga said the arrests were a clear sign that the police were winning the fight against stock theft in the province.

Meanwhile, an operation by the Mthatha stock theft unit and Sulenkama visible policing led to the recovery of a herd of 20 sheep and 19 lambs.

The animals were found hidden in the Ethwa forest.

Tonjeni said no one had been arrested and the animals have been handed over to the owner who had earlier positively identified the livestock.