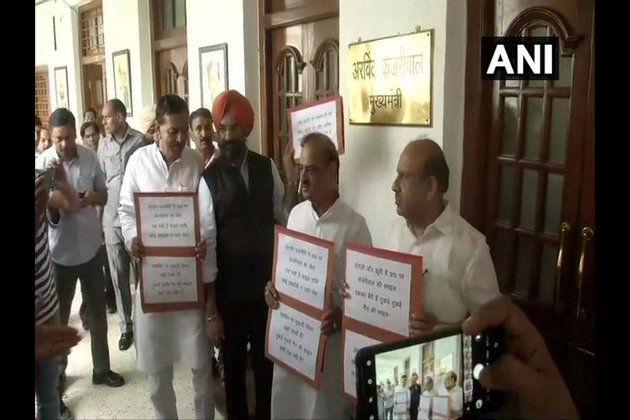 "We wanted to introduce a congratulatory resolution on the revocation of Article 370, we were not allowed to do so. I have been suspended for the entire session while Manjinder Sirsa was marshaled out," Leader of Opposition in the Delhi Assembly, Vijender Gupta, told ANI here.

SAD MLA M S Sirsa also took to Twitter to lash out at Kejriwal and AAP for the incidents which took place today inside the Delhi Assembly.

"Shame on you Arvind Kejriwal. After seeing your and AAP's anti-India stance the people of Delhi are asking us whether the Delhi constituency comes under India or Pakistan. Kejriwal must answer why was I denied to express congratulation on abrogation of Art 370," Sirsa tweeted.

Aam Aadmi Party (AAP) had earlier on August 5 supported the central government over its decision to scrap Article 370 of the Constitution of India.

"We support the government on its decisions on JK. We hope this will bring peace and development in the state," Delhi Chief Minister and AAP leader Arvind Kejriwal tweeted after the Center's decision. (ANI)

SYDNEY, Australia - Stocks in Asia nose-dived on Tuesday, following on from a sharp sell-off on global markets overnight, during ...