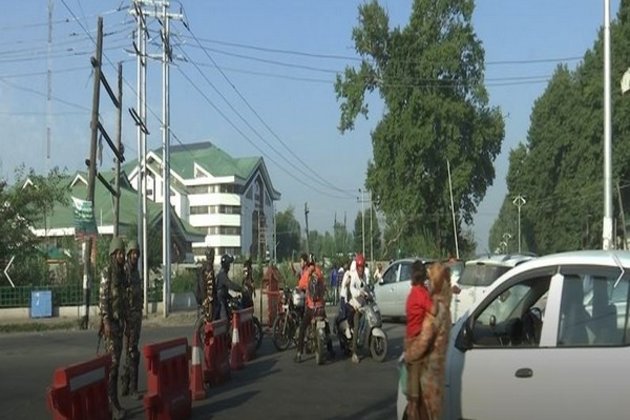 Srinagar (Jammu and Kashmir) [India], Aug 23 (ANI): Security was heightened and restrictions imposed in Srinagar by authorities after posters issued by the separatists called on people to march towards the local United Nations military observer group office here to protest the abrogation of Article 370 on Friday.

Local police blocked all major junctions leading to the office of UN Military observer's office in the Sonwar region of the city.

The traffic police also put barricades and erected concertina wires at many places to prevent protesters from marching to Lal Chowk and Sonawar. Scores of security personnel were also deployed to maintain peace and order in the region.

After repealing of provisions of Article 370 from Jammu and Kashmir, which granted it special status, several leaders in the Valley were put under house arrest as a precautionary measure by the Centre.

Earlier this month, Parliament defanged the Article 370 also passed the Jammu and Kashmir (Reorganisation) Bill 2019, reorganizing the state into two Union Territories -- Jammu and Kashmir with Assembly and Ladakh without legislature. (ANI)