More jobs for Milwaukee, thanks to Donald J. Trump 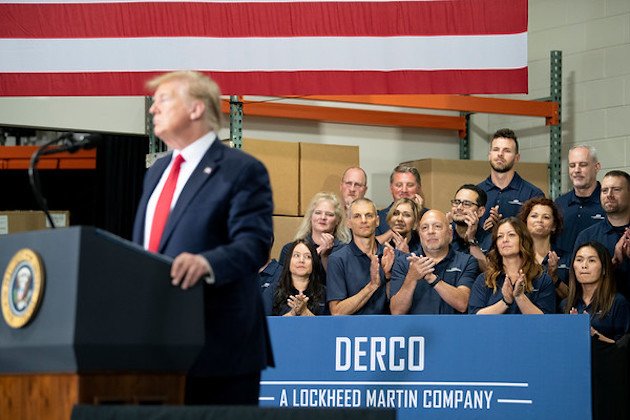 MILWAUKEE, Wisconsin - Derco, a Lockheed Martin company, is planning to expand its plant in Milwaukee, Wisconsin, by up to 15% by the end of this year.

The expansion is to auger in the development of parts for the F-35 Lighting II fighter jet.

Derco has been around since 1979 and is highly regarded in ther defense contracting sector as around 20% of its workforce consists of veterans.

"From here in Milwaukee, you are supporting magnificent aircraft, and soon you'll support the unstoppable, stealth F-35 Lightning II," he said. "I am thrilled to be back in the great state of Wisconsin with the extraordinary men and women of Derco. We are here today to celebrate the triumphant return of American manufacturing, and everything we are doing to keep the assembly lines rolling."

Lockheed Martin CEO Marillyn Hewson was on hand and announced that Derco would employ 18,000 people overall this year and gave much of the credit to Trump policies.

"The main reason for that, Mr. President, is because of the pro-growth policies that you have put in place on tax reform and regulatory reform," she said.

Derco has been named one of the Top Workplaces in Milwaukee for the past four years.

The company initially will support the management and delivery of 1,500 different F-35 parts to locations around the globe. This increased work will create more skilled jobs for repair technicians, operations personnel and supply chain management experts.

The F-35 is the most advanced, survivable and connected fighter jet. The United States' program of record is for 2,456 aircraft, and Lockheed Martin is set to deliver 1,000 more to U.S. allies.

To support the growing business, Derco is investing in its facility and is breaking ground to expand the campus. The company says it is also looking to add to its 1,200 suppliers to develop repair capabilities for the F-35 in Milwaukee. Currently, the F-35 provides $1.2 million in economic impact across the supply chain in Wisconsin.