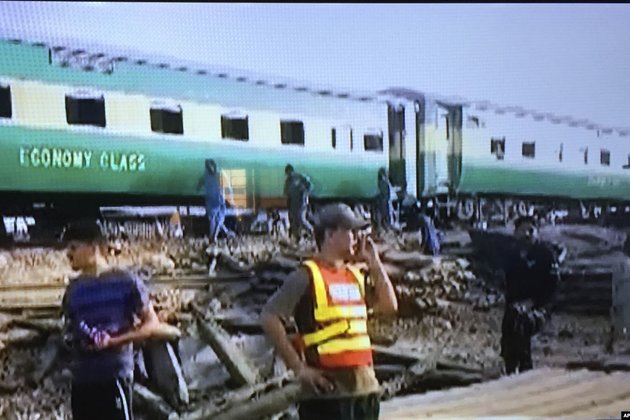 At least 11 people were killed and dozens more were injured when a passenger train smashed into a freight wagon parked on railway tracks in eastern Pakistan, officials say.

Police official Hafeez Bugti said on July 11 that the death toll could increase as at least three injured people were in critical condition. Other passengers could still be trapped inside damaged carriages, he added.

Police Chief Umer Salamat said the train was traveling from the eastern city of Lahore to southwestern Balochistan Province when the accident occurred at the Walhar Railway Station near Rahim Yar Khan in the early morning hours.

The engine of the Akbar Express appeared to be destroyed and at least three carriages were derailed in the collision, Salamat said.

The cause of the accident was not immediately known, officials said.

Deadly train accidents are not uncommon in Pakistan.

Many lines were constructed by British colonial rulers before 1947 and have not been upgraded.

Based on reporting by dpa and Dunya News

MINNEAPOLIS, Minnesota - A white police officer in the U.S. city of Minneapolis seen kneeling on the neck of a ...

Africa, then Asia to be invaded by locusts, says United Nations

NAIROBI, Kenya, May 29 (Xinhua) -- The Horn of Africa region will experience another swarm of locust invasion in June ...

Russia's most prominent conman left wave of death and deception

This is the story of how the mastermind behind MMM, Russia's biggest financial pyramid scheme, managed to get elected to ...

BEIJING, China May 29 (Xinhua) - A spokesperson for China's Ministry of National Defense on Friday criticized a report recently ...

TEHRAN (Tasnim) - The Atomic Energy Organization of Iran (AEOI) dismissed as "a futile attempt" the U.S.' new decision to ...

HANGZHOU, May 29 (Xinhua) -- AliExpress, a global online retail marketplace and part of Alibaba Group, announced on Thursday that ...

SYDNEY, NSW, Australia - Stocks in Asia skidded on Friday, and the U.S. dollar dived, as the relationship between the ...

PHENOM PENH, Cambodia - Scientists and environmentalists are urging an international moratorium on deep-sea mining after releasing a report indicating ...

NEW YORK, New York - U.S, stocks ran out of steam on Thursday with fears about the worsening U,S.-China relationship ...