Half of Lufthansa long haul flights cancelled as pilots strike 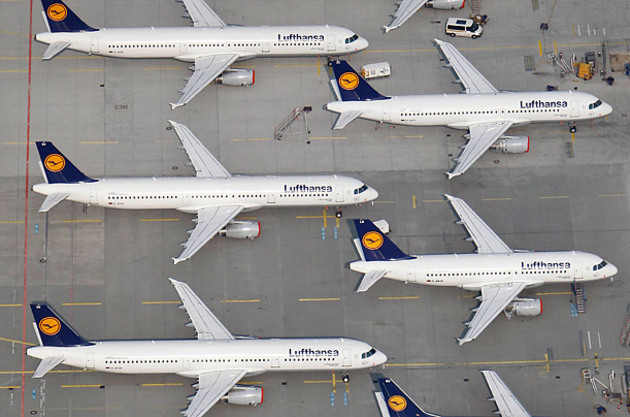 The latest strikes and cancellations are part of a protracted dispute over early retirement benefits and cost cuts by the airline.

Lufthansa canceled 74 of a total 160 long-haul connections scheduled for Saturday, affecting about 20,000 passengers, the airline said in a statement.

A few short and medium-distance flights were canceled too, due to the knock-on effect of a strike on Friday, a spokesman confirmed.

Cargo traffic was affected on Saturday as well, although to a much lesser extent with 15 of 18 flights taking off on time, he added.

Lufthansa said it hopes traffic will largely get back to normal on Sunday, although a few long-haul flights could be canceled as a result of the knock-on impact of Saturday's walkouts.

Lufthansa wants to cut spending to levels nearer those of its rivals as it is put under pressure by its low-cost competitors Ryanair and easyJet on European routes and by airlines such as Turkish and Emirates on long-haul flights.

Strikes cost Lufthansa more than US $214-million in lost operating profit in 2014, and losses are mounting again as pilots hold their 15th walkout since last April.

The airline wants to eliminate early retirement benefits for new hires, but the VC pilots union is insisting that they be kept in place.

The pilots also want Lufthansa to enter mediation on other outstanding issues, such as pay increases and bringing costs down on flights to tourist destinations.

Lufthansa is also due to begin separate mediation talks with unions representing various departments of its ground staff in Germany over wage hikes.

ABU DHABI, UAE - A phone call by U.S. President Donald Trump clinched what is being described as an 'historic ...

The catastrophic blast which led to the deaths of more than 200 in Beirut on 4 August, has prompted more ...

PERTH, Western Australia - A 28-year-old man was scheduled to appear in Perth Magistrate's Court on Friday over allegations he ...

NEW YORK CITY, New York - A man who was arrested as he was about to board a plane at ...

BEIRUT, Lebanon - The World Food Programme (WFP) is racing to prevent food shortages in Lebanon as the country continues ...

Rush, but not race, to develop coronavirus vaccine

Mixed day on Wall Street, Dow the only gainer

NEW YORK, New York - U.S. stocks meandered in and out of positive territory on Friday and ended up with ...

Companies from China seek to list in U.S. despite trade tensions

SYDNEY, Australia - Stocks in Asia were on the rise on Friday, while the U.S. dollar was mixed. Only the ...

Fears mount over last weeks of Trump presidency if he loses

What could happen to America if Trump were to further, severely crash the U.S. economy the day after Joe Biden ...