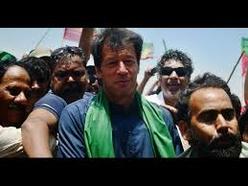 ISLAMABAD Political tension loomed in Pakistan as opposition politician Imran Khan's party announced Monday it will renounce all its parliamentary seats to push its demand that Prime Minister Nawaz Sharif should resign and hold fresh elections.

Khan, a former cricket star, claims that last year's general election, in which his Pakistan Tehreek-e-Insaaf (PTI) party came third, was rigged. He has led thousands of supporters from the eastern city of Lahore to stage a rally in Islamabad seeking the resignation of the government.

Calling for mass civil disobedience to unseat the government, he has urged people to stop paying utility bills and taxes to the current government, accusing Prime Minister Nawaz Sharif of plundering the national wealth.

The government has begun talks to try to end the destabilising five-day political standoff. To tackle the protests, the authorities have deployed tens of thousands of security personnel on the streets of the capital and blocked main roads with shipping containers, causing major disruption.

Khan's turnout has been much lower than expected. He had promised to swamp the capital with a million of his supporters, but the crowd has rarely crept above 20,000 people.

The parallel protest by Tahir-ul-Qadri, a Canada-based televangelist, has taken the steam out of Khan's protest. The populist cleric has led his own "long march" from Lahore with thousands of followers.

The cleric enjoys wide support through his network of schools and mosques in Pakistan. He is also calling for the resignation of the Sharif government but wants the country to be ruled by a "national government" of technocrats," rather than freshly-elected politicians.

In another development, neighbour India called off the proposed secretary level bilateral talks after Pakistan's envoy in New Delhi was reported to have invited separatist leaders from the troubled Kashmir for tea and consultations this week.

India termed the tea invitation to the separatist leaders in Kashmir an "attempt to interfere in India's internal affairs" and thus totally "unacceptable."

India and Pakistan have fought two of three wars since 1947 over Kashmir, which is claimed by Pakistan too.

Members from the Hindu Sena protested near the Pakistani High Commission in New Delhi on Monday.

The Pakistani Foreign Ministry said meetings with Kashmiri separatists were a "longstanding practice" ahead of any India-Pakistan diplomatic talks. It termed cancellation of the diplomatic meeting as a "setback to Islamabad's efforts to promote good neighbourly relations with India."